Cavs news: Kevin Love sees LeBron James getting the banana boat crew together for the 2018 All Star Game 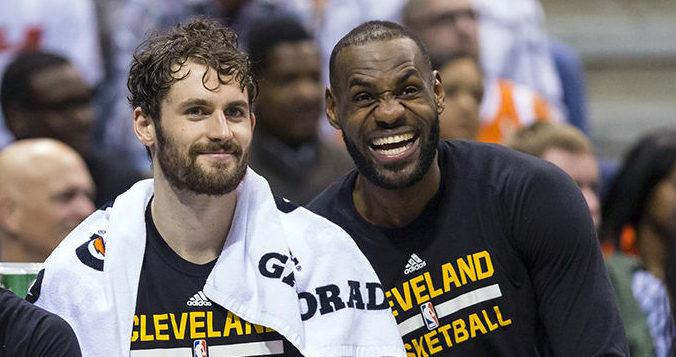 After a summer shakeup that dramatically changed basketball, preseason has taken the liberty to alter basketball operations. The National Basketball Association is doing away with the traditional East verse West format and introducing a pickup version with team captains and a draft.

While change is always tough on the lay man, players find the new format exciting and many believe fans will too once they see how much more competitive it is. Four-time All Star Kevin Love was asked if he found the changes necessary after Wednesday’s shoot around.

“Yeah. If you look at the shear numbers this year, it was like a quarter of the All Stars from the Eastern Conference last year went West, maybe that had something to do. I know that the league offices were in talks of changing it in some way and that’s come up in the last several years. It’s something to toy with and that makes it fun.”

“I like the format, I think it mixes it up. In some way it will make it more competitive and it will be interesting to see who picks who. They’ll be picking their boys and it’ll be like the blacktop in grade school.”

Love hit on the most exciting part of the new format: who picks who? The question leads to infinite, entertaining possibilities. For example, Love was asked, if it came down to it, how LeBron James would pick between Steph Curry and Kyrie Irving for his All Star floor general. Love offered a different answer.

“It depends on how far [LeBron] has picked. We’ve heard about peanut butter and jelly [Dwyane Wade] this week and the banana boat guys, so we’ll see what happens. He’ll have fun with it. He has a future in this league of being on that side of basketball operations so I’m sure he’ll put together a hell of a team. If we need shooting, those guys are there, if we need ball-handling and distributing, those guys are there.”

While every interesting All Star pick will be framed around drama, the best ones will be about basketball.