On Thursday, Cleveland Cavaliers power forward Kevin Love made an appearance on SiriusXM NBA Radio with Cavaliers former general manager David Griffin and Frank Isola of the New York Daily News to discuss his decision to re-sign with Cleveland after LeBron James left to join the Los Angeles Lakers.

While responding the question with what’s become a familiar answer about wanting to “see if [the Cavaliers] can still make noise” in the Eastern Conference, Love would also mention that Cleveland looks at the Indiana Pacers as a team to model themselves after.

“…We just played a team in preseason in the Indiana that’s been able to put some stuff together. They’ve acquired and put together a number of guys from trades, have drafted guys and they’ve stayed the course, especially with their coaching staff … You’ve got to give credit to them.”

“We look at a team like them that’s taken so many steps in the right direction and had continuity with their team. They’re kind of the pinpoint and marker for teams in the East and what they want to be and want to grow to…We looked at the film today, I looked at their team last night and how in shape they are and how physical they play, they have knockdown shooters and we feel like if we put something together like that, it’s going to be great for us but that’s going to take some time.”

There are indeed potential parallels between the Cavaliers and Pacers. Last year, everybody was saying that the Indiana Pacers were going to struggle to be a playoff team after trading All-Star swingman Paul George to the Oklahoma City Thunder for Victor Oladipo and Domantas Sabonis before Oladipo had a breakout season.

Like the Pacers, the Cavaliers traded away an All-Star in Kyrie Irving and through a series of trades, the eventual return for Irving became Collin Sexton, Jordan Clarkson and Larry Nance Jr. Sexton would have to have an Oladipo-like growth but the competitive fire, athleticism and attacking style is already something the 19-year-old shares with last year’s Most Improved Player.

There are similarities between players like Rodney Hood and Pacers sharpshooter Bojan Bogdanovic, or Cedi Osman and Pacers defensive standout Thaddeus Young, Jordan Clarkson and former Pacers sixth man Lance Stephenson (who has since been replaced by Tyreke Evans). Those Pacers didn’t just rely on Oladipo but played a tough, physical brand of basketball while placing just about every player in position to play to their strengths.

After going 48-34 last season and nearly defeating the Cavaliers in the first round of the Eastern Conference Playoffs, Cleveland has picked a fine team to emulate. 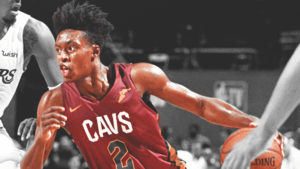 JUST IN: Collin Sexton to come off the bench in the season opener
Related TopicsCavaliersKevin Love