Kevin Love nearing a return, speaks about his recovery with reporters

The NBA’s defending champion Cleveland Cavaliers have been without the services of Kevin Love since February due to a knee injury and subsequent surgery. Initial reports stated that he would be out six weeks. Now, it seems the 6-foot-10 double-double machine is nearing a return.

Earlier this month, Love had his stitches removed and was granted permission to resume on-court agility and shooting drills. There is no doubt that the Cavaliers miss his perimeter shooting and presence in the paint. Before his injury, Love was averaging 20.0 points, 11.1 rebounds, and 1.9 assists per game.

Just yesterday, Love created a bit of a stir on social media by posting a picture of his jersey prominently hanging in his locker room stall. It seems he is itching to get back on the floor with his teammates.

#Cavs Kevin Love said he was antsy to return, feels like a rookie again with that excitement & hopes to return this weekend, but isn't sure

After today’s practice, Love spoke about his recovery with reporters. The former UCLA stand-out hinted that he may be ready as early as this weekend.

“Will you be ready by tomorrow? Do you have a specific date?” a reporter asked.

“Uh, I don’t know about tomorrow, but probably likely (on) the (upcoming) road trip,” Love replied as he caught his breathe. “I feel good. As you can see, I’m just a little winded. I imagine I’ll be more-so just getting back after four weeks, five weeks, whatever it may be. But other than that, I just gotta get my legs underneath me, let that adrenaline pass whenever I go out there and just get my wind back.”

When asked how his body is reacting to being back in action and whether or not he’s happy with the process, Love said he’s taking it one step at a time.

“Yea,” Love replied. “I think you always take the right steps, you know. I’ve got with our training staff and done all the right things; got the proper rest, got the strength back. So now, it’s just getting out there. I know we don’t practice a lot, but try to go one-on-one in certain drills, three-on-three as much as you can. And then that eventually leads up to game reps. So, I think that’s what we’re looking at now. Like I said, I don’t know if it will be tomorrow, don’t know if will be sometime this weekend or next week, but mostly, everything feels good.”

Love was then asked if he thought about making an earlier-than-projected return from his injury.

“Well, I always like to think that way,” Love said with a smile. “Be optimistic about it and do all the right things, but you gotta listen to the doctors, especially when we’re a team that’s looking to go very far and has championship aspirations. But you definitely want to come back when your ready and have the proper rest and proper healing time.”

As previously mentioned, Love has been out of the lineup for a while. When asked how difficult it will be to reacclimate himself into the rotation, Love said it shouldn’t be an issue.

“I dont think so,” Love replied. “Maybe in years past, but I’ve been with this team long enough now to know where I fit in. Been around this team long enough to know — watch film. We watched film today. I’ve been around all the games. And besides going to get my surgery in New York, I didn’t miss any games. I always watched them, even if I’m not there. So, I think it will be pretty easy for me to come back in. I just don’t want to mess up any of the rythm that these guys have, so just go out and play our brand of basketball.”

The Cavs have put up a 7-6 record with Love sidelined. His impact on both offense and defense cannot be questioned. When asked how he would balance returning from an injury while making an impact at the same time, Love said he’s just going to take what is given to him.

“Uh, you know, I know they’ll probably want to get me involved quickly, but try not to force-feed me or anything like that,” Love said. “Just take what’s given to me, play inside out, and just play my normal brand of basketball. You know, the way we play, that ball will find you.”

The Cavs have struggled on the glass in Love’s absence, especially on the defensive end of the floor. When asked if it has been difficult watching his team struggle in that category, Love, one of the league’s premier rebounders, gave an honest reply.

“I mean, the hardest part about being out during that first year, that first run (at the 2016 NBA championship), was just knowing.” Love said as he shook his head. “You know, we went to six games in the finals, but just knowing there were certain places I could’ve helped. Help space the floor, rebound, both ends of the floor. It’s no different than right now. It’s just regular season, and knowing that I can help out definitely from a rebounding perspective. Defensively, I can help. Offensively, I can give us another weapon. So, I’ve always said we’re a lot better when we’re healthy.”

Finally, Love was asked if the team’s atmosphere was perking up due to everyone getting healthy. Love, an experienced veteran, listed some of the issues that NBA teams deal with during a season.

“Yea,” Love said with a smile. “Having a full roster. You’re gonna go through a number of things during a playoff run. You know, getting hit, guys having minor injuries and getting through those day-to-days is always part of the process. But yea, I definitely feel like there’s a good atmosphere, a good energy, and a good frame of mind for guys coming back.” 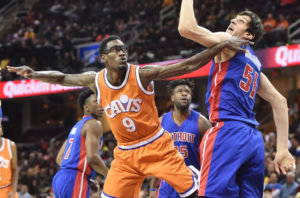 JUST IN: Cavs Head Coach Tyronn Lue had to ask for permission to sub in Larry Sanders
Related TopicsCavaliersKevin Love