At some point, one has to feel bad for Kevin Love. The former All Star forward could not seem to catch a break from the media ever since arriving in Cleveland. No poolside meeting or a string of double-double games was able to help Love keep the speculations off his back.

Fortunately for the Cavaliers, Love has a good head above his shoulders. Never did he let all the uncertainty and unwarranted attention out of becoming the third wheel in the team’s trio of stars affect how he approached the game. Because as we all know, the dip in his play was borne out of accepting sacrifices coupled with, perhaps, some less than satisfying utilization of his skills.

For now, Kevin Love must bear with all the rumors swirling around as they intensify in the coming days. Until then, he may once again be at peace with his future in Cleveland. But according to ESPN’s Marc Stein, that won’t be the case for Love after the season.

Despite his past and recent shoulder woes, Love holds extensive value not only because of his history of production but also because he still has three guaranteed seasons left on his current contract. But some rival executives increasingly believe that given the Cavs’ expectations in such a trade and the complexity of moving a star in midseason, it’s more likely that Cleveland seriously considers Love pitches in June or July, after it sees how the postseason plays out as well as what new coach Tyronn Lue gets out of the former All-Star in the playoffs.

What’s going in favor of Love, should he survive past the trade deadline, is the fact that the Cavaliers are still expected to be among the top contenders for the title.

Recently appointed head coach Tyronn Lue has the team playing at a new and faster pace which was enough to manhandle powerhouse San Antonio, sans Tim Duncan, at the Quicken Loans Arena. It’s just too bad that their regular season series against the Golden State Warriors is already over, but it could serve them well when these new Cavs fly under the Warriors’ radar should they meet again in the finals.

If everything works out for the Cavs and Kevin Love in June, he may finally achieve his well-deserved peace. 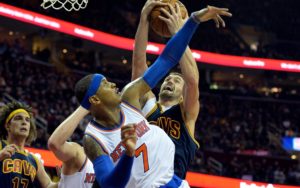 JUST IN: The Two Sides Of Getting Carmelo Anthony To Cleveland
Related TopicsCleveland CavaliersKevin LoveNBA