How has Kevin Love improved as a member of the Cleveland Cavaliers?

Kevin Love has certainly endeared himself as a fan favorite throughout his tenure with the defending NBA champion Cleveland Cavaliers. Quick outlet pasees, tenacious rebounding, and accuracy at range are just a few elements of Love’s game.

So, how has Love, a 6’10” “stretch 4”, managed to improve his game so much with the Cavs? Well, there could be several answers to that question.

In his first season with the Cavs, a lot of fans and analysts speculated on Love’s fit with the likes of LeBron James and Kyrie Irving. There were even faint whispers of “should the Cavs trade Kevin Love?”

Now, those same critics should be changing their tune.

Cleveland’s coaching staff has made a conscious effort to get Love more involved on the court. So far this season, Love is averaging an impressive double-double (22.0 points and 10.4 rebounds per game). Furthermore, “K-Love,” as he’s affectionately known by his fans, is shooting the three-ball at a 41% clip.

Sam Amico weighs in on Love’s progression as a Cavalier in this recent podcast.

It seems Love is playing some of the best basketball of his career, and Cavs Head Coach Tyronn Lue deserves a lot of the credit for that.

There is no doubt that Coach Lue has Love more engaged from the perimeter. In his first season with the Cavs (2014-15), Love shot 37% from beyond the three-point line. Last year, Love shot 36% from three-point land. Now, this year, Love is taking even more shots from outside. In fact, Love is averaging six threes attempted per game to go with his aforementioned 41% rate of accuracy.

As Amico states in his podcast:

“Clearly, Love is playing better than any point in his career as a Cavalier.” 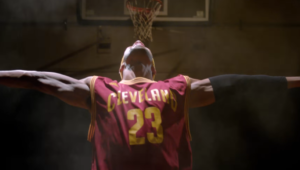