While making an appearance on the Hang Time Podcast with NBA.com’s Sekou Smith, Cleveland Cavaliers star power forward Kevin Love discussed a myriad of topics that ranged from his evolution as a leader to his belief that his development as a three-point shooter has been the biggest change he’s made to his game over the course of his career. Love also discussed former teammate LeBron James, who he considers to be “the best player ever.”

Numbers and accolades aside, LeBron has achieved a mastery of the game that few players, if any, can claim. He’s a preternatural passer with a nearly unparalleled basketball IQ that excels at attacking the rim but can score from the post, from the midrange or from behind the arc. He’s a physically dominant player who cleans the glass and defend all five positions, well, at 6-foot-8, 250 pounds.

He’s the epitome of a complete player and his ability to defy Father Time may be his greatest achievement to date considering his immense talent.

Off the court is perhaps where James makes his biggest separation. Because he’s proven to be an astute businessman throughout his career, he’s influenced younger players to venture out among the venture capitalists and attempt to become business moguls themselves.

He’s also constantly advocating for human rights and investing in the education and betterment of the youth. LeBron’s not the only player in the league to do so. Far from it. However, he’s the face of the league and he’s the first face of the NBA to put so much of his own money and energy into the community while in the prime of his career.

Love’s opinion of LeBron differs from that of Kyrie Irving, who they both played with for three seasons in Cleveland. Irving believes, like many others, that Michael Jordan — a symbol of indomitable will and undefeated in the NBA Finals — is the best player of all-time. 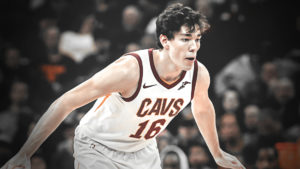