Newly-crowned champion Kevin Durant and his Golden State Warriors may have defeated the Cleveland Cavaliers in this season’s NBA Finals, but he isn’t letting that stop him from praising Kyrie Irving‘s work ethic and style of play.

“Kyrie just makes you happy,” Durant said of Irving. “He makes you happy when you watch him play. You just smile when you watch him play, cause it’s like, for somebody to be that skilled, you know he had to work tirelessly at it. The stuff he has in his package is next level stuff that you can try to teach your kids to do it, but you’ll never be able to do it. I’ve never seen nobody block his layup, and he’s 6’2″. I’ve never seen one person pin his layup on the glass — not one. The spin he’s got on (the ball) — and he don’t have to look at it. I’ve got so much respect for him because I know how much work he put in to be that good. I’ve never seen nobody like him.”

“Uncle Drew,” as Irving is known, dazzled the crowd on several occasions in this year’s Finals, including Cleveland’s 137-116 Game 4 win. The crafty ball-handler posted a game-high 40 points (15-of-27 from the field, 7-of-12 from beyond the arc), seven rebounds, four assists, and one steal in 41 minutes of action.

As most hoops fans know, the Cavs fell to the Warriors by way of a gentleman’s sweep (four games to one). Despite that fact, it’s nice to hear Durant showing Irving respect. 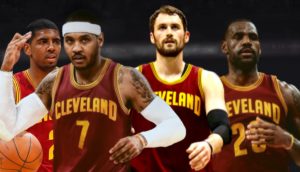