LeBron James has once again found himself in the headlines as rumors circulated on Wednesday afternoon that he has decided that this upcoming season will be his last with the Cleveland Cavaliers.

In light of that, Golden State Warriors All-Star forward Kevin Durant went to social media to talk about James’ future in Cleveland with rapper Lil Dicky where he made a strong stance against trading the four-time league MVP while showing a huge sign of respect toward him in the process.

There is clearly a tremendous amount of mutual respect between the two star forwards that goes well beyond the court. That said, it would be far fetched to think at this point that the Cavaliers even seriously consider moving James even if there was some truth to the rumors.

On top of that, the 32-year-old holds one of the few no-trade clauses in the league that would allow for him to hold the final say on any potential trade presented to him. There is also no equal value in return for James as he can single-handedly change the entire outlook of a franchise with his play alone.

More than anything else, this shows the huge amount of respect that Durant has toward James as a player and the level of impact has he has made on the game. 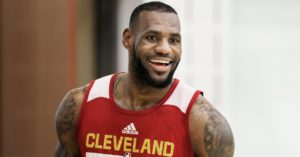