Joe Harris: A Rookie in the Rough Dion Waiters and Mike Miller are often the first Shooting Guards that come to mind for the Cleveland Cavaliers, but one offseason addition shouldn’t be overlooked: Joe Malcolm Harris. A rookie out of Virginia, Harris was drafted by the Cavs with the 33rd overall pick in the 2014 NBA Draft.

Harris led the Virginia Cavaliers to an ACC tournament title and a Sweet Sixteen appearance in the NCAA March Madness tournament. As a result, he was named the 2014 ACC Tournament MVP. Throughout his four years as the starting point guard at Virginia, Harris averaged 12.6 points, 3.8 rebounds, and 1.9 assists per game.

While Harris’ strengths are the three-point shot and defense, he can definitely improve on his athleticism and ability to finish at the rim. Playing along three All Stars is definitely help him speed up the process. When asked about the opportunity to play with Cleveland’s superstars in his rookie season, Harris showed humility and maturity:

He has seen his minutes increase due to injuries to Matthew Dellavedova (out 4-6 weeks) and Dion Waiters. He had a coming out party in the win against the Pelicans back in October, getting 20 meaningful minutes off the bench. While he only had 5 points on 2-6 shooting, he had one assist, one rebound, and no turnovers. The biggest indicator of his play, though, was his point differential for the game. The Cavs scored +18 more points than the Pelicans when Harris was on the court. This statistic really shows the defensive intensity that Harris brings to the court.

Note: Harris is in the game during crunch time, instead of Miller/Marion

Blatt played Irving, LeBron, Marion, Love, and Thompson/Varejao for a large part of the game, only bringing Thompson, Miller, and Harris off the bench. Due to the inexperience of the other players on the roster, A concern from the game was Miller’s defense, as he often looked lost on defense and his man got off many open looks. Something notable from the game: Blatt gave Harris crunch time minutes over Marion and Miller, as he plays better defense than Marion does and spaces the floor better than Miller does.

Dellavedova has been a solid backup point guard, but his injury allowed Harris the opportunity to step up and win over the coaches. Since Delly’s return, Marion’s playing time has gone down, which means that Harris’s playing time hasn’t been affected much.

According to Bleacher Reports, an NBA source says:

“it is only a matter of time until Joe Harris is inserted into the starting lineup, at the SG position. At least one member of the Cavs front office is pushing for it already.”

Marion was a solid starter, but Blatt recently switched to Mike Miller for the starting SG. Harris probably won’t get a crack at the starting spot unless injuries force Blatt’s hand.

Arguably Harris’s best performance so far on the big stage was against the Hawks in November, when the Cavs shot an amazing 61.3% from deep, and made their first 11 three-point attempts of the night. Harris really played well, shooting 4-5 from three-point range, grabbing four rebounds and dishing out four assists in 21 minutes before fouling out with a +/- 23 for the night. Harris also drained a 30-foot buzzer beater right before the half, which really got the crowd pumped. Harris has given the Cavs a consistent role player who comes into the game and plays very good defense and will make a few threes to help the scoring.

Harris benefits from being 6’6”, which means that he can guard taller guards like Klay Thompson and James Harden. The Cavs have gotten consistent play from a rotation of LeBron, Harris, Marion, and Miller at the SG and SF positions. Since Harris is not meant to play point, LeBron has seen increased minutes there, which he hasn’t minded.

Harris will probably play more minutes than Miller as the season drags on, since he is younger and is less likely to get injured. It is worth noting that Harris is more likely to play during crunch time than Marion due to his ability to spread the floor. Miller has ascended over Harris in terms of this, and is often with the Big 3 in late game situations.

Lately, Harris has been getting meaningful minutes due to injuries to LBJ, Marion, and Love. While it is not guaranteed that he won’t see his minutes decrease once those players return, his consistent play on both ends of the floor won’t hurt his case for consistent playing time. In their recent rematch with Atlanta on LeBron’s 30th Birthday, the Cavs played without James entirely and Love for a quarter. Harris made the biggest impact off the bench, contributing a season-high (and career-high) 13 points in 27 minutes; he added four rebounds as well as an outstanding defensive effort. The Cavs are in a bit of a slump as of late, and Blatt is honestly trying to do anything he can to turn the team around, so there is a possibility that we may see Harris get some more playing time soon.

While Harris is only a rookie and has much to learn, he figures to have an important role this NBA season. He will possibly even start a few games later on. Regardless, he will rise to the challenge. 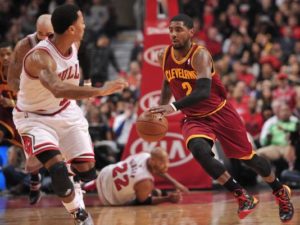