Joakim Noah asked about the goal of beating Cleveland

With the Cleveland Cavaliers and LeBron James reaching the NBA Finals the past two seasons, the rest of the Eastern Conference finds themselves playing catch up in the hopes of overcoming the King and his teammates. After reaching six straight NBA finals, every season the NBA finds itself in the same predicament: who is going to challenge James and his team in the East?

Many have come, and for the past six years, all have failed. However, this offseason, the New York Knicks made some noise with the signing of long-time Eastern Conference rivals as well as former Chicago Bulls players, Derrick Rose and Joakim Noah, to join forces with familiar foe Carmelo Anthony. With that being said, this newly assembled Knicks outfit is leaving nothing unsaid, proclaiming their goal is to well and truly knock off LeBron and the Cavaliers for the top dog in the East.

RELATED: Cavs owner Dan Gilbert will give championship rings to over 1,000 employees

During his first interview to start training camp, Joakim Noah claimed that’s very much their team’s objective. Per Frank Isola of the New York Daily News:

There is no love lost between that guy, LeBron James, and Noah, who have had numerous battles in basketball and in trash talk over the years. They have been fierce rivals for almost a decade, and that it doesn’t seem to be near an end anytime soon.

With the Knicks not reaching the playoffs for the past three seasons, these moves as well as the addition of sharpshooter Courtney Lee to join promising big man Kristaps Porzingis, has created a renewed hope and excitement within the city. The Knicks starting five has potential, and Carmelo Anthony is particularly happy with former MVP Derrick Rose, who could be the best point guard he’s played with.

“I’ve never played alongside a guy like Derrick,” Anthony said. “I’ve played alongside other point guards, different style, different type of point guards. To play alongside an explosive guy like Derrick, someone who can pick the pace up, who can push the pace throughout the course of the game, someone who’s a threat at that position — I think for me, the only thing that I can do is go out there and play basketball and enjoy playing basketball again and having fun with the game.

“I’m excited. I haven’t felt like this in a long time.”

There is no question that Anthony’s goal will be the same: to take down the Cavs led by the King. Despite being best friends off the court, his goal has always been the same, but he’s yet to achieve it.

Although the Knicks look great on paper, it is yet to be seen how they will function as a collective unit. Health will definitely be an issue with Noah participating in just 29 games last season, and missing 68 games the last two campaigns. Throw in the well-publicized injury journey of Derrick Rose as well as his off-court case, and the Knicks may be biting off a little more than they can chew at this point.

RELATED: Tristan Thompson doesn’t think Cavs can win it all without J.R. Smith

All three players have succumbed to LeBron’s dominance in the East come playoff time, and with the defending champions coming into this season as hungry as ever to repeat, the task of dethroning the King will not be any easier. 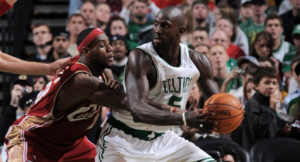