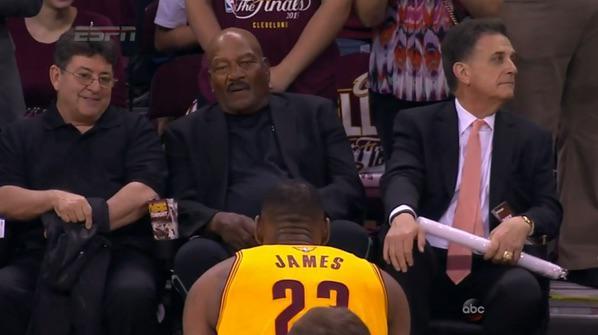 The city of Cleveland’s last professional sports title was in 1964, when the Cleveland Browns won the NFL Championship, now called the Super Bowl. A member of that team and longtime Clevelander Jim Brown was in attendance to witness the Cleveland Cavaliers’ first ever NBA Finals home victory on Tuesday.

Before Game 3, LeBron James spotted the all-time great sitting courtside, it wasn’t just an ordinary fan to him. James recognized the greatness around him, and immediately showed his respect.

After the game, Brown told NEOMG it was one of his personal “greatest sports moment of all time.”

“It was an honor for this young man to pay tribute to an old soldier. It was one of my favorite sports moments of all time,” Brown said. “He didn’t have to be thinking about me, so for him to even have the brilliance to show that kind of respect… It doesn’t happen too many times in my life.”

“It was a wonderful feeling.”

Back when he played for the Browns as a fullback in his nine year career, Jim Brown left the sport of football having set numerous NFL records at the time. in 2002, Jim Brown was named the greatest pro football player ever and is even considered one of the best athletes of all time. Being a born-and-raised Ohioan, Cavaliers forward LeBron James knows all too well the greatness of Brown.

“What he means not only to sports but to the outlier of figures during his time — himself, Lew Alcindor, Bill Russell, Jesse Owens, Muhammad Ali — those guys meant something more than just the sport that they were actually competing in,” James said. “And I think we all should know those stories and them setting foundations for guys coming after them all the way to this point where I am today.”