The athletic guard out of Oregon State University was selected by the Cleveland Cavaliers in the 2012 NBA Draft as the 24th overall pick. However, the team made the pick for the Dallas Mavericks who have already agreed to package their first rounder, Tyler Zeller for Cleveland’s picks. It was basically “Cavs for Mavs” all over again.

Three forgettable seasons passed and Cunningham now sees himself fighting for a roster spot in Cleveland.

In the first five games of the preseason, the 6’4” combo guard has caught the attention of everyone with his solid play on both ends of the floor. He’s currently averaging 13.6 points, 3.6 assists, and 1.0 steals per contest, highlighted by a 31-point outburst in Philadelphia. But before he gets drowned by praises, that game against the 76ers was lost by the Cavs off a turnover by Cunningham in the backcourt. He’s also shooting 41% while turning the ball over twice.

Let’s survey the competition for that one roster spot, which only boils down to three players. Cunningham, Austin Daye, and Quinn Cook. Daye is the weakest link among the three because of the fact that LeBron James, Richard Jefferson, and in some instances, J.R. Smith will already man the wing for the Cavs. Meanwhile, Quinn Cook is a cerebral player and looks to be the single pure point guard in this bunch. What’s going for Jared Cunningham though is that he has already caught the intrigue of Coach David Blatt.

“He’s done nothing except acquit himself well in every way. He’s playing good two-way basketball and making a serious run to try to make this team.’’

If and when Cunningham makes the cut, he’ll most likely burn time on the bench behind Mo Williams, Matthew Dellavedova, and Kyrie Irving, when the All Star point guard returns. But for the young journeyman, he would be learning from the best, witnessing how a winning culture works on day to day basis, and the experience would eventually prove invaluable to him towards attaining his next NBA goal. 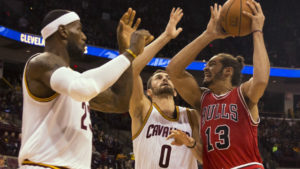