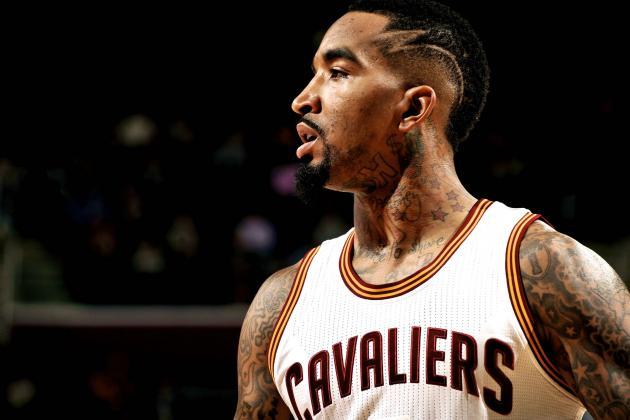 J.R. Smith was the throw-in from the deal that brought defensive specialist Iman Shumpert to Cleveland. In less than two months, Smith is easily one most irreplaceable players on this team.

LeBron James, who has slowly earned the trust of J.R. Smith on and off the court, is said to really enjoy having Smith on the team despite his troublesome past. Ethan Skolnick of Bleacher Report reported on the James and Smith relationship:

“It’s been very very easy. And I think one of the reasons LeBron trusts J.R. so much is that they had worked out in previous summers and LeBron feels like he understands J.R. better than a lot of other people do around the league.

“LeBron James wanted those trades that were made earlier in the season,” says Skolnick. “Dion Waiters never really embraced being a catch-and-shoot guy. LeBron always feels like he plays better when he plays with guys who are comfortable filling that role. That’s the role that J.R. Smith has filled best over the course of his career.

“When the Cavaliers traded for those three players: Mozgov, Shumpert, and J.R. over the course of those two trades, J.R. was the afterthought, a piece that they had to take. They weren’t even sure they were going to keep him. They might have just waived him, but when he came to Cleveland’s facility, he bought into everything said. He wanted to be there. Once they got that assurance and LeBron got that assurance, it was pretty much all systems go from there.”

After a mid-march victory, James posted this pic with Smith in the locker room:

Wit my dog @teamswish after a great team win in Dallas! We here to stay and with a purpose. Rock with is us! #DemBoyz #TheLand #StriveForGreatness

Smith and LeBron have really had each other’s back this season and J.R. is already saying that he definitely wants to come back to Cleveland and stay with the team long term.

“I am enjoying myself more here than anywhere I’ve been,” said Smith on this year’s Cavaliers team. “I want to be here, hopefully we can have the same team next year if everything goes well.

VIDEO: LeBron With A Pair Of Big Dunks In The First Quarter!

“I’ve known him for a long time, but finally being on the same team and being able to get together on and off the court, it’s definitely better than I could imagine,” Smith said regarding new teammate LeBron James

I love all my teammates! From this team to all the others I've been on! But this is the most fun I have had on any team!! Thank you @cavs #TheLand

Smith could get some good offers this offseason, especially after his brilliant and surprisingly consistent play with the Cavs. But J.R. says he hasn’t thought about his contract situation yet, instead getting caught up in the incredible amount of fun he’s had as the Cavs have only lost seven games in the last 11 weeks.