J.R. Smith Reacts To Phil Jackson Divulging His Personal Problems To The Public Phil Jackson has gotten J.R. Smith puzzled with the former’s recent comments on the Cavalier guard’s exit from the New York Knicks.

Smith’s departure from the Big Apple was considered to be a good riddance by many Knicks fans, mainly due to his inconsistency and lack of focus, and the Knicks’ team president had some things to say about Smith’s fallout with the team in one of his interviews from not so long ago.

We talked about his statement to the press that our shooting guard depth was going to be the team’s asset, but so far it hadn’t worked out that way. He was supposed to carry the scoring load for the second unit and he wasn’t doing the job. I also said that because of his unacceptable behavior, he had two strikes against him with this team. He didn’t really respond. He’s a very sensitive guy, with his big doe eyes. He looked like he was going to tear up. But he finally responded that he was going through some issues with his gal.

Apparently, this didn’t sit well with Smith and this is what he had to say.

It was crazy to me because I try to leave my personal life on the side and when somebody sits there, sits behind a desk and tells you to open up on what’s going on with you, you’re thinking that’s going to be between the two of y’all. So, for me, it tells me something I already knew. But to come from someone like Phil, it’s just, it’s crazy. It makes you not want to tell anybody anything [that has] anything to do with your business. It was tough, but that’s how he handles stuff, that’s how he does it.”

I’ve talked to a few people and they don’t understand why he did it, but I definitely won’t have that conversation with anybody else after that. So it just stuck with me. It’s all right.

J.R. Smith’s career has been shaded by questions about his commitment, focus, and off-court antics more than his volatile scoring ability, three-point shooting, and respectable defense when locked on. It’s a shame but he knows this and has relatively transformed himself into a better team player in Cleveland.

While Smith was considered a godsend by Coach David Blatt, his play right now leaves plenty to be desired but as long as he keeps off the non-basketball distractions, he should eventually find his mark again. So, this episode in his relationship with Phil Jackson should be set aside for more important things on the basketball court. 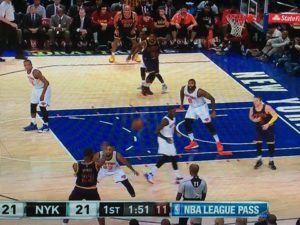