After missing around 3 months of action due to his recovery from a fractured right thumb, shooting guard J.R. Smith will make his long-anticipated return to the court tonight against the Detroit Pistons. Per Jason Lloyd of The Athletic:

J.R. Smith will play tonight, coming off the bench

Fox Sports Ohio’s Fred McLeod said that in addition to coming off the bench, Smith will also be on a minutes restriction as he works his way back into game shape.

Ty says we will see some JR tonight, coming off the bench with a mins restriction

Smith has played in just 21 of the Cavs 62 games this season, missing 36 games just due to the fractured thumb. Smith’s last action was against the Milwaukee Bucks back on December 20, 2016, and he’s expected to be eased back into the lineup. He was expected to miss anywhere from 12-to-14 weeks with the thumb injury, and his return tonight puts him just one day ahead of the 12-week mark of his recovery.

In addition to Smith, Coach Tyronn Lue will also be back tonight after missing the Cavs’ last game due to an illness.

Ty Lue will coach tonight's Cavs game vs. the Pistons. 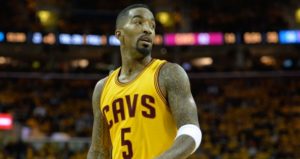