J.R Smith explains what LeBron James means to him 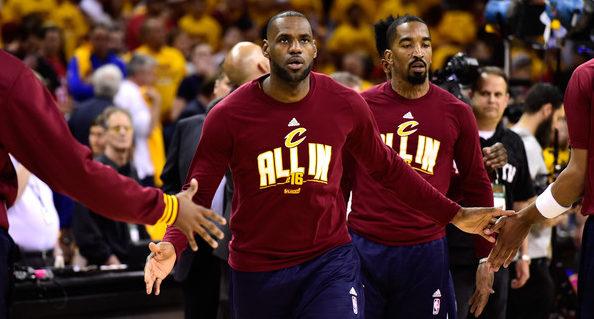 Before his move to the Cleveland Cavaliers, J.R. Smith was seen as one of the locker room issues that haunted the New York Knicks. His move to the bays of Lake Erie was heavily doubted, but re-payed the city of Cleveland in the ultimate way.

Smith has been hampered by injury all season, but credited LeBron James as the inspiration to hit the gym and get his body back into the shape it needs to be, and uphold himself to a high standard.

“He’s meant everything, he sets the bar,” Smith told ‘On The Record’s’ Paul Rivera. “If you could see somebody who’s been to six straight Finals, four MVPs, three Finals MVP’s, two gold medals, Player of the Year, Sportsman of the Year. What else could you say to him abut the game of basketball?

The way he works, it’s no comparison. You cant compare anybody in my mind, that I’ve ever seen to work and dedicate themselves to the game as much as him, and that’s on and off the court.”

Smith would go on to say that James’ standards inspire more than just the locker room, but many in the organization and community.

It’s just a testament to how he expect everything to go and everybody falls in line with it.”

Smith played a pivotal role in helping James reach his ultimate goal of winning a title for his home state franchise. Nobody will ever forget his red-hot start to the second half in Game 7, catapulting his Cavaliers to an eventual history making moment.

It’s because of that potential that James sees in his teammates that he upholds them to sky-high expectations, and that expectation is another ring.