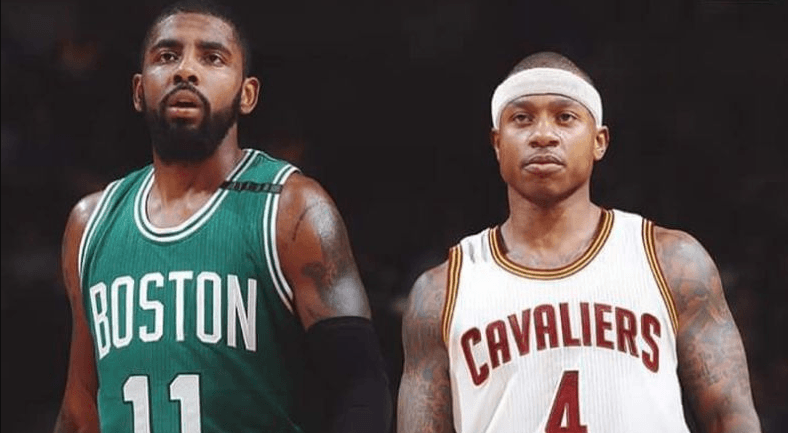 Isaiah Thomas is a deadly shooter off the ball, and will be indispensable to Cavs’ Finals aspirations

Isaiah Thomas is a deadly shooter off the ball, and will be indispensable to Cavs’ Finals aspirations

When the Cavaliers traded star PG Kyrie Irving for a package primarily centered around PG Isaiah Thomas, many fans lamented the move as a downgrade; after all, Irving is one of the most exciting players in the league, is one of the greatest finishers at the rim of all time, and shot 40% from three-point range last season. Thomas, on the other hand, is extremely undersized at 5’9” and is currently recovering from a serious hip injury that could affect him later in his career. However, a closer look at the stats reveals that Thomas could make the Cavs a significantly better teams.

Firstly, Thomas’ version of playmaking could be a big positive for the Cavs. Thomas averaged 28.9 points and 5.9 assists per game. Avery Bradley followed up Thomas with 16.3 points. That’s a large disparity between the first and second place scorer. As far as assists, Al Horford averaged 5.0, Marcus Smart 4.6, and Bradley and current Cavalier Jae Crowder each had 2.2. For the Cavs, LeBron James led the team with 26.4 points, Irving followed with 25.2, and Kevin Love added in 19. James again led the team in assists, with 8.7, and Irving added 5.8, but the next full-time players, Kevin Love and JR Smith, only averaged 1.9 and 1.5 each. What can we glean from this?

The Boston Celtics’ offense revolved around ball movement, getting everyone involved, and eventually culminating in Isaiah Thomas scoring. For the Cavs, either James or Irving ran the offense on nearly every play, which was supposed to create open shots for Love, Smith, Kyle Korver, and others, but usually ended up with James or Irving scoring in isolation.

The excuse for Irving’s underwhelming assist numbers has been that he’s played second fiddle to James, and has never been the primary ball-handler and facilitator of an offense. But let’s look as Irving’s assist numbers with Cleveland before James returned: from 2011-2012 to 2013-2014, 5.4, 5.9, 6.1. Pedestrian, but nothing too bad. But a player Irving is often compared to, fellow PG John Wall, has never averaged less than 7.6 assists in a season, despite being his team’s primary ball-handler and scorer.

Perhaps Irving’s assist numbers will improve this year in a new offense, perhaps not. But Isaiah Thomas is already used to not getting all the stats, which should suit his transition to playing with LeBron James well. But perhaps most importantly, defenses will no longer be able to key in on Thomas, as they will have to account for James and Love, among others. That means that Thomas will see increased spacing compared to what he witnessed in Boston, so he will be able to take more open shots, and that is a fantastic thing for the Cavs. 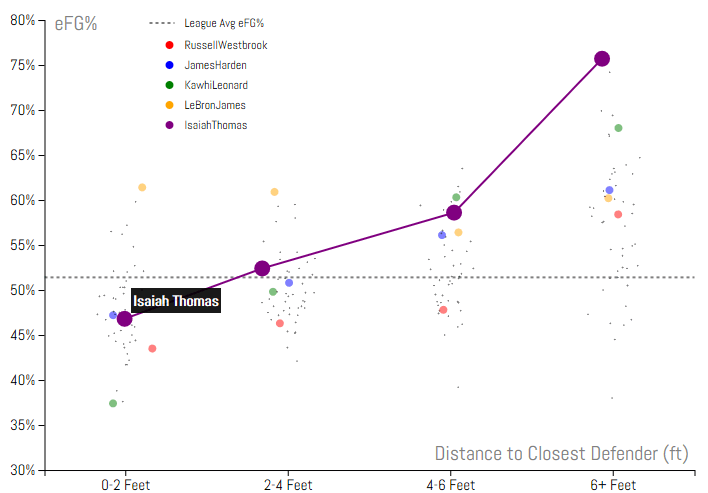 Effective Field Goal percentage, of eFG%, is similar to the usual FG% stat, except that it weighs three-point shots as worth 50% more than two-point field goals, just as in scoring. This graph shows players’ eFG% as the distance to the closest defender increases. Thomas ranks below average in the 0-2 feet bracket, due to his volume scoring play style (he took 19.4 shots per game). His size makes it more difficult for him to finish inside and to shoot in the midrange, which makes his 28.9 points per game average even more impressive. However, once Thomas gets some distance in between him and the defender, his shooting percentage shoots up, eventually placing first in the league in the 6+ feet bracket.

When Thomas is open, he’s a fantastic shooter. One possible lineup the Cavs could deploy to take advantage of this could be Thomas/JR Smith/Kyle Korver/James/Love, five players who are deadly in catch and shoot situations, three of which are drive threats as well.

For comparison, here are the graphs for Kyrie Irving and Steph Curry: 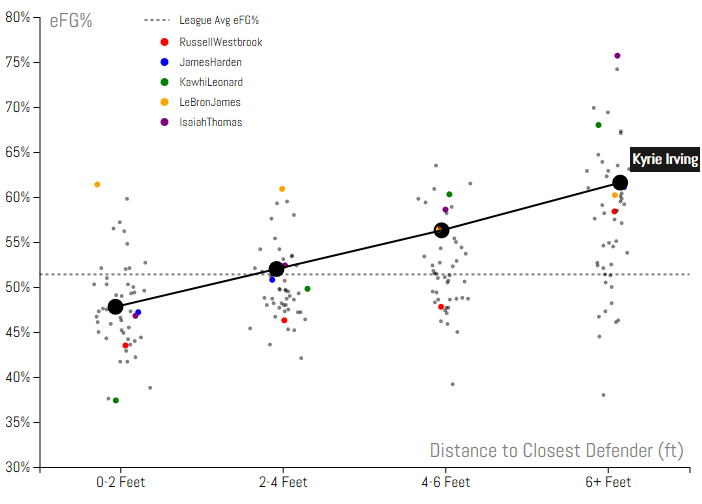 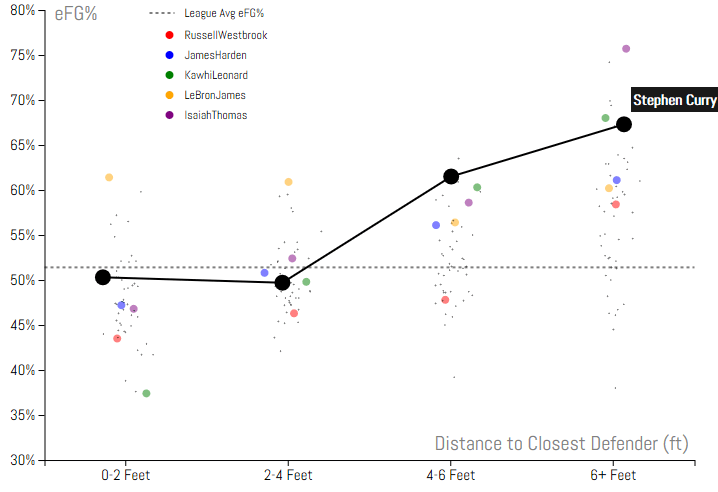 When sizing up Curry’s numbers, Thomas comes out on top, and by a good margin.

Once fully healthy and up to speed, Isaiah Thomas will be vital to the Cavs’ championship hopes. He will be a capable replacement for Irving, while providing Cleveland with elite shooting ability, which will be desperately needed in the playoffs. 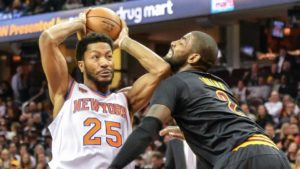