Is Sasha Kaun On His Way To Cleveland? 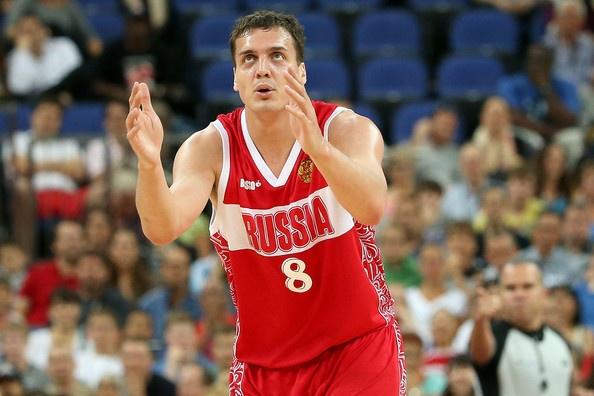 With David Blatt and Timofey Mozgov already in tow, the Cleveland Cavaliers are looking to add another piece to their Russian connection. Blatt coached the Russian national team on their way to a bronze medal in the 2012 Olympics and Timofey Mozgov was a part of that group along with a former NCAA champion whose draft rights are owned by the Cavaliers.

In the Cavaliers’ summer league matchup against Karl-Anthony Towns and the Timberwolves, Sasha Kaun was seen sitting between Larry Drew and Tyronn Lue as part of a heavy Cavalier contingency completed by LeBron James, David Griffin, and David Blatt. All signs point to talks between the Cavs and Kaun as they try to finally steal the seven footer out of Europe.

For a brief history, Cleveland bought the former Kansas Jayhawk’s draft rights from Seattle in 2008 but Kaun opted to take his talents to CSKA Moscow. The Cavs have kept their eyes on him ever since.

The 30-year old center has had a very successful career in Europe and his presence in Cleveland would be huge as he could serve as Mozgov’s backup while also keeping the oft-injured Anderson Varejao fresh for the playoffs.

The caveat, however, in all these talks is the money aspect as Dan Gilbert is already looking at a swollen payroll even with restricted free agents Tristan Thompson, J.R. Smith, and Matthew Dellavedova still unsigned. Unrestricted free agent Kendrick Perkins will most probably end up with another team and it’s only a matter of time when Brendan Haywood’s contract is off the books.

However, Kaun has this to say about the financial hurdle of bringing him to the NBA:

“That’s probably something that shouldn’t be a problem. Hopefully coming to this team, it will give us an opportunity to win, and winning is more important to me than money. I don’t think I want to do it (play basketball) because of the money. Just play basketball and enjoy it and play with some really great players. That’s the more important thing.”

“My interest level is very high. I definitely would like to play here, especially with the Cavs, you know, a team that’s got a chance to win a championship.”

The lowest the Cavaliers can pay him is $525,000, which is the veteran’s minimum for players without NBA experience. Kaun was reportedly earning close to $3 million in Europe so the Cavs need to convince him to play for their best offer which is three-years at $4 million.