Is Kyrie Irving’s Injury History A Cause For Concern? Kyrie Irving has had a rough start to his NBA career. He played for one of the worst teams in the NBA and he also could never stay healthy. Since his Duke Blue Devil days, Irving has been in and out of a suit due to injuries.

Irving was only at Duke for one season and played 11 games in his only year at Duke due to an injury and subsequently surgery on his toe. The Cleveland Cavaliers did not let this stop them from drafting Irving first overall in 2011.

Irving has been plagued with injuries throughout his NBA career. It’s virtually impossible to go through one season, let alone an entire NBA career, without sustaining any major injuries. Things happen and players get hurt. While injuries are a part of basketball, there is a definitely come cause for concern when it comes down to Irving and his injury history. 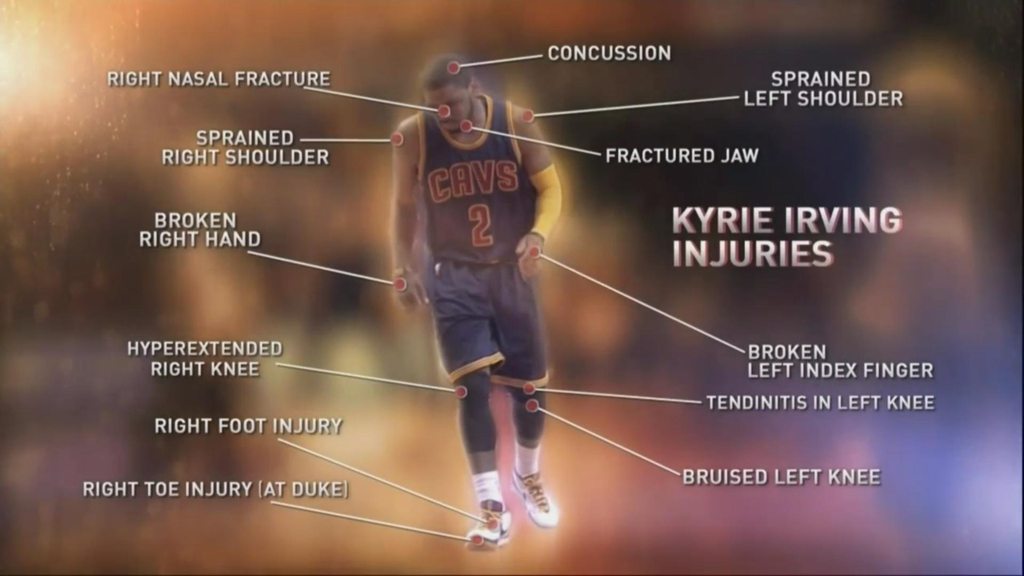 The fractured kneecap Irving most recently sustained is the only major injury not pictured above.

From a broken bone in both hands to injuries on either or both feet, Kyrie Irving has already dealt with enough injuries for a 15-year NBA veteran. This recent fracture of Irving’s kneecap is believed to have happened here at the hands of Warriors guard Klay Thompson:

Despite the only three-to-four month timetable for Irving’s return, the Cleveland Cavaliers are strongly considering keeping him out of action until December January 2016. The Cavs prized guard who is a top five point guard in the NBA is also going to be starting the first year of his 5-year, $94.3 million extension signed last summer. That’s a lot of guaranteed money for a player who is oft-injured, so the Cavs will have to monitor his minutes and keep him in top shape. With the right precautions being taken and following doctors orders, Kyrie Irving and the Cleveland Cavaliers should be just fine come the 2015-2016 NBA campaign.