Is It Time To Stop Comparing NBA Greats To Simply Accept And Enjoy Greatness? 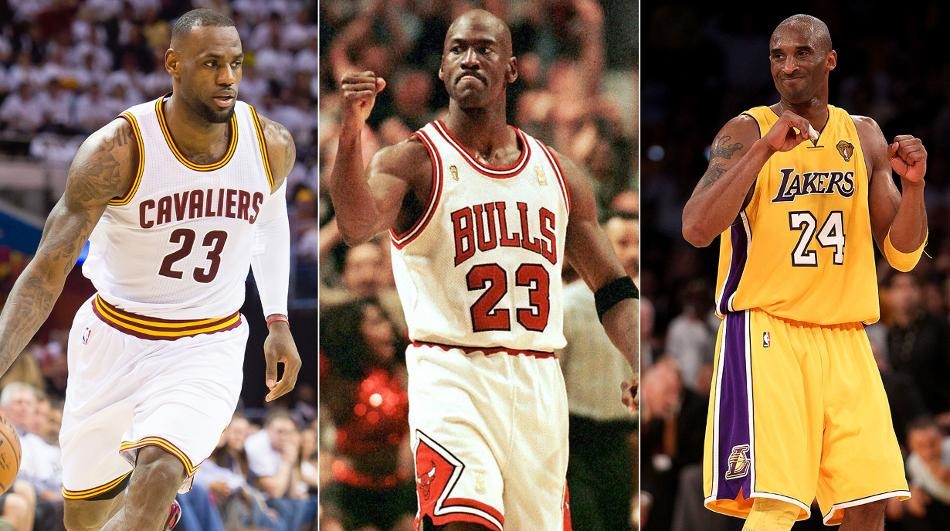 Will LeBron James be better than Michael Jordan? Is he really the second coming of Oscar Robertson, after becoming just the second player in NBA history to reach the top 25 in both points and assists? While it is always fun and interesting to hear the media, fans, former and current players talk about their Mount Rushmore’s and all-time great teams, does it really matter? Does the media spend too much time comparing greats-to-greats, instead of just appreciating the athlete in the present day? Instead of the media always trying to compare today’s players to players of the past, they should just let every player set their own legacy.

LeBron would be in agreement with that statement. After his record setting night, James said that there are too many comparisons going on.

“But when it comes to our sport, we’re so eager to say, ‘Who is better: Oscar or [Michael] Jordan?’ or ‘Jordan or LeBron or Kobe [Bryant] or these guys?’ instead of just accepting greatness. And if you understand the history of the sport, then there is no way you could ever forget Oscar Robertson. This guy, he averaged a triple-double for like, forever.”

James has always been touted as the next Michael Jordan since he came under the spotlight in high school. While LeBron has arguably lived up to these expectations, comparing one to the other, or any other athlete is a waste of time. All of the players that are frequently mentioned in analysts and players top 10s ever, played in a much different game then their counterparts. When Wilt Chamberlain, Bill Russell, Oscar Robertson and Jerry West played there were no 3-point shots on the court. When MJ, Magic Johnson, and Larry Bird played, the game was much more physical. Now in the era of James, Kobe Bryant, Kevin Durant, Dirk Nowitzki, Tim Duncan etc., the game has shifted to a much smaller and more finesse shooting game. The point being, is comparing one player in an era to another player of another era is hard to do. The size differences, shooting, physicality of the game and talent in general, all have to be taken into consideration. This is extremely hard to do, even in today’s world of advanced statistics.

Furthermore, there is no right or wrong way of actually comparing one athlete to the other. When Jordan’s Bulls ran off six championships in eight years, this automatically became the expectance for James. It took LeBron nine seasons to win his first title. Does this mean he is less talented a player than Jordan? Does this mean that Jordan played with better players? Does this mean there was less talent then and more talent now? Did Jordan have an easier path to the finals? Since Jordan was 6-0 in the finals, and James is 2-4 does this mean he isn’t as great? When people make arguments such as these do they look at the other players on the rosters? If so, a 2-4 argument isn’t acceptable because James took a Cavaliers team to the Finals in 2007 that had no reason to be there. Furthermore, James averaged 36 points, 13 rebounds, and 9 assists per game in last years finals, is it his fault they lost? Should he be criticized and have his finals record compared to Jordan’s with all of these reasons taken into account?

I am only using these two players as an example because everyone wants to compare their careers. My point is there is no way of actually answering these questions. Instead what we as fans should do, is enjoy the greatness and uniqueness of each individual player. We should appreciate James for being one of the greatest athletes of his generation and how he can single handedly dominant a game. We should appreciate Jordan; for the way he was able to physically dominate an era of basketball that was more rigorous than ever. We should appreciate Bryant for his ability to score the ball better than perhaps anybody ever. Comparing players can diminish the dominance of an individual.

While it is a compliment to use greats in the same sentence as other players, it isn’t always the right way to judge players based on accomplishment and accolades. On paper, Robert Horry has seven rings, but Charles Barkley doesn’t have one. However nobody in their right mind would rather take Horry over Barkley. The point is accolades, accomplishments, championships, and records, aren’t always telling. Instead, we should be grateful that some of the greatest players in NBA history are still lacing them up today, and enjoy them for how they play the game and not get busy with comparing them to retired players. In years down the road, instead of comparing young stars to players before their times we should just let those players make their own legacy.