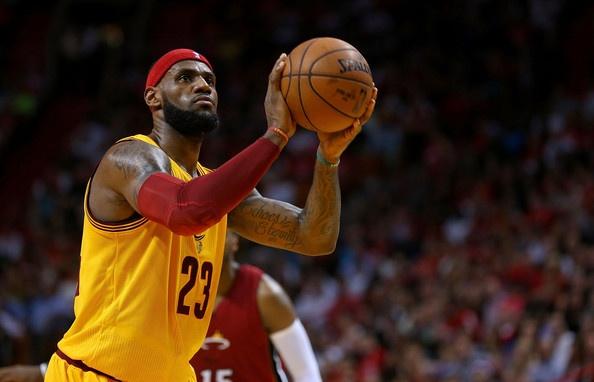 In case you haven’t noticed, LeBron James has made another tweak to his solid, yet always improving offensive game. But it’s not in the junpshot, the drive, or the passing aspects of his game. Instead, LeBron James has changed his free-throw routine.

In the awful free-throw shooting game against the Houston Rockets last Sunday afternoon, where James shot just 3/11 from the line, he also missed a pair of free throws in overtime that could have potentially won the game for the Cavaliers. Following the game, James took to Twitter and Instagram to express the disappointment he had following the game:

Way to trick it off today Bron!

Looking in the mirror tonight after a tough lost of my part like You're your biggest challenge, competition, drive, obstacle, motivation, etc so it's nothing u haven't seen before! Back in the lab tomorrow to continue the drive to striving to be the Greatest I've ever seen! #StriveForGreatness

LeBron James was asked by NEOMG’s Chris Haynes if he was seeing correctly when he saw James with yet another different free throw routine following his 29 point, 14 assist game, with which he responded:

“Yes, I’m trying something out. I’m a guy that doesn’t mind being coached. I’m coachable. If someone sees something and they think it could help me, I don’t mind looking into it. Even at this stage in my career.”

LeBron didn’t put a name to the person or people who convinced him to change up his free throw routine, but did mention that it was someone close and someone who’s basketball mind he trusts, so we’ll take his word for it. Clearly, however, James is done costing his team games at the free throw line, and he touched on his continuously-expanding game:

“I’ve got to have a growth mindset, man. That’s what it’s about, me still trying to improve even at 30 and 12 years in the league. I think I’ve got room to improve so if it’s changing my free throws, if it’s doing something different in the post, or if it’s how I pass the ball or defend, I’m trying to get as much out of this game as I can while I’m in here. So, that’s why I don’t mind change.”

James newest routine, has him doing his usual dribbling and ball spinning, and as he nears his shooting motion, James pauses briefly while holding the ball below chest level, and then puts the shot up from there. Here’s a look at James’ new free throw routine in a recent game against the Dallas Mavericks:

So how effective is this new routine? Well, James has shot 316/443 free throws this season, putting him at 71.3%. Since the game against the Rockets, James has shot 24/35 from the free throw line, and although it is a relatively small sample size, that puts the career 75% free throw shooter at just 68.5% in those five games. James’ current 71.3% is almost tied for the lowest of his career. Back in the 2007-08 season, James shot 71.2% from the line.

So far, the routine is not shaping up with the positive results James, the Cavaliers, and Cavs fans had hoped for, but James has another month to perfect the stroke before the free throws count more than ever in the playoffs.