The Cleveland Cavaliers signed free agent shooting guard/ small forward Iman Shumpert to a 4-year, $40 million deal this past summer. Shumpert’s talents, however, go beyond the NBA court. As Cavs fans have come to know over the past couple of months, Shump is also a rapper and likes to make music when he’s not on the NBA floor.

Shumpert announced on Twitter that if he would get enough ‘Retweets’ and ‘Favorites,’ he would release his own remixed version of Drake’s Hotline Bling’ called ‘Highlight Reel.’

Here’s the song via SoundCloud:

Here are the lyrics, courtesy of Scott Sargent from Waiting For Next Year:

(Spoken: You want me to back up from the mic a little bit?)
(You should…call me)

But that’s your handle for a steal
I know my bros gonna run her lane
See me and her we think the same
So you my brother n—— never change, ever

So please don’t tell me mami, chill
‘Cause we did not grow up the same
And I do not deserve the hate
You should just leave me out your conversations

All I know is when my hotline bling
My ladybug is on my phone
Then midnight lead to early on
She the only one deserve my [tone?]

Lord I’m so (?)
Toast to the (?)
Numbers are full now
Just like my father’s
So I’m an Oak Parker4
I root for Chicago
I lived in the Brownstone5
She grew up in Harlem 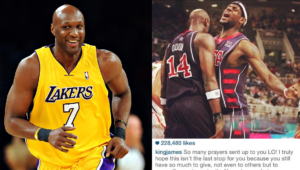