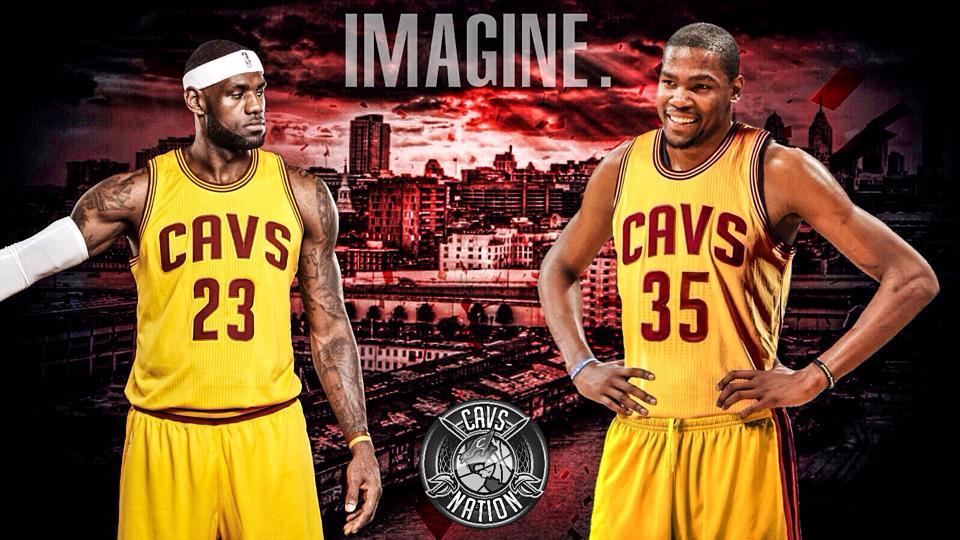 The All Star small forward for the Oklahoma City Thunder, Kevin Durant, is entering the final year of his 5 year, $89 million contract he signed back in 2010. Despite Durant’s very public desire to stay with the Oklahoma City Thunder, there have been reports of him going to his hometown Washington Wizards or the Los Angeles Lakers. There will definitely be other teams that will wine and dine Durant come July 1st, 2016, and one of those teams COULD be the Cleveland Cavaliers.

Durant burst onto the NBA scene after getting drafted #2 overall to the Seattle Supersonics (now OKC) in the 2007 NBA Draft. He helped lead the franchise in the relocation, and was a key component in leading the Thunder to the 2012 NBA Finals, where they lost to the LeBron-led Miami Heat. Despite being the unofficial #2 in the league to only LBJ, he has had trouble reaching the Finals. The West is a difficult conference to play in, with powerhouses such as the San Antonio Spurs, LA Clippers, and Houston Rockets to name a few. Oh, and the champion Golden State Warriors. It is clear that this has frustrated Durant, as he will be entering his ninth year in the league come Fall 2015. Despite being injured for a good part of the 2014-2015 season, he still managed to put up 25.4 points, 6.6 rebounds, and 4.1 assists in the 27 games he played. He is hoping for a bounce-back campaign in 2015, leading into his free agency. He will be tempted to leave the Thunder to chase a ring, as LeBron did back in 2010. He could potentially join the Cavs.

Something that helps the Cavs enormously is the nine billion dollar TV deal the NBA signed last fall. This will allow the NBA salary cap to rise significantly, from $67.1 million this year, to $89 million in 2016, and $108 million in 2017. This will allow teams to bring in more talent, but it will also increase player salaries. LeBron will most likely be a free agent again come next summer, hoping to sign a one-year deal to sign a max deal in 2017. The Cavs are fresh off already dedicating $260 million dollars in contract money to retain their players, but owner Dan Gilbert is willing to spend even more in order to win. 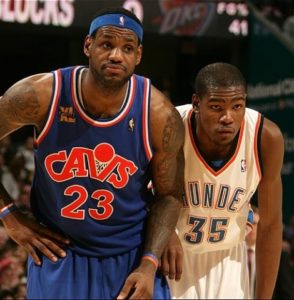 In the 2016 Free agency period, Kevin Durant will most likely command at least $25 million a year, which is huge. This is a LeBron-type price tag. The Cavs can still pull it off.

The Thunder understand that if KD wants to leave, they don’t get anything in return. The best that they can do for themselves is to sign-and-trade him, so that they get something (a player, a pick) in return. If the Thunder send Durant and Mitch McGary, the Cavs could, in return, give up Love, along with two first round picks. This would reunite Love and Russell Westbrook, who played collegiate ball together at UCLA and had great chemistry on and off the court.

Let’s be clear: Kevin Love is a great player, and the city of Cleveland is so glad to have him home. But the only way to get Durant would be to get rid of one of the Big 3 contracts – and there’s no way Kyrie is getting traded. Love would have to take the hit for the Cavs.

In order to clear up some more space, the Cavs would likely have to package youngster Joe Harris with the expiring $12 million owed to Anderson Varejao to another team in order to get around $14 million in additional cap space, which would allow for the Cavs to have around $11 million in cap space when the transactions are done. Now the question is, how would Kevin and LeBron mesh together? Durant is an excellent spot up shooter, with a deadly three-point shot. James is an excellent passer and a force in the paint. They would complement each other nicely, as they do on the USA Olympic Teams. One of the two – most likely LeBron James, would have to play PF, which should not be too much of a problem. KD really wants to win, and let’s be honest: whichever team the King is on pretty much gets an automatic spot in the Conference Finals. He would also learn a few things from James, as the two already train in the off season together.

In summary, this Kevin Durant’s to CLE dream is very possible, yet very unlikely. He would have to play second fiddle to LeBron, and this would also push Kyrie down to the third option on offense, which is not desirable. The salary can work, but it would hurt the Cavs in the long run. Durant and James’ personalities could clash, and the team could end up with enormous tension in the locker room. Despite all of these things that could go wrong, KD to CLE is still a legitimate possibility. When James, Chris Bosh, and Dwyane Wade teamed up in Miami, no one saw it coming. The same thing could very much happen next summer. We can dream, right?