How Should The Cavs Proceed Without Anderson Varejao? 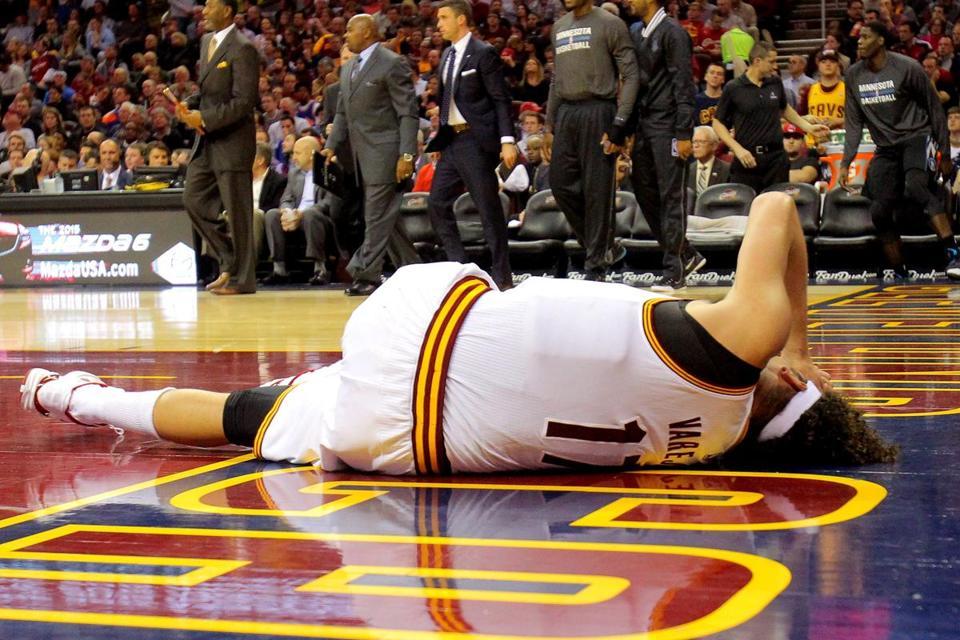 Anderson Varejao suffered an excruciating ankle injury last Tuesday night in a matchup against the Minnesota Timberwolves. In pursuit of one of his famous, high-intensity offensive rebounds, Varejao extended around a defender before planting his left foot, collapsing onto the court’s baseline. He did not return to the game, and left the arena with a walking boot. There was reasonable concern that Varejao injured his Achilles and an MRI the next day revealed that Andy did indeed tear his left Achilles tendon, ruling him out for the remainder of the 2014-15 season.

In what’s considered a “win-now” season for Cleveland, the Cavaliers were already deemed incompetent at the Center position, and now they are extremely thin on the frontline with Varejao for the season and potentially longer. The only pure centers on the team are Brendan Haywood and rookie Alex Kirk; both Kevin Love and Tristan Thompson have played the position numerous times in their careers, but they seem out of place without their PF spots. That said, how do the Cavaliers proceed?

Cleveland has always been in the hunt for a big man, whether they’ll admit it or not. They’ve lacked the defensive presence inside to start this season, ranking 2nd worst in opponents’ field goal percentage at the rim. Cleveland is allowing opponents to make 63.4% of their shots in the paint compared to the mid 50’s percentage allowed by elite teams like the Portland Trailblazers, Golden State Warriors, Memphis Grizzlies, and the Chicago Bulls. All of those teams have notable defensive big men, or at least players who make their presence felt around the rim.

In a starting role last season, Tristan Thompson averaged just 0.4 blocks per game in 31.6 minutes per game and couldn’t help the Cavs defensively as they allowed opponents to shoot 61.3% from within 5 feet last season. Kevin Love was equally as unproductive defensively, averaging 0.5 blocks per game in 36.3 minutes per game as the Minnesota Timberwolves were the worst ranked team in defensive percentage at the rim, allowing opponents to shoot 63.1% at the 5 foot range.

The Cavaliers have been in the market for players like Nuggets’ center Timofey Mozgov, Grizzlies back-up center Kosta Koufos, as well as free agents Jermaine O’Neal, Emeka Okafor. New York Knick’s Kenyon Martin expressed his interest in joining the Cavs, saying that he’s healthy and ready to go after spending time on the IR with a small injury.

On Cavs, FA Kenyon Martin said,”I’m definitely interested.I believe I can immediately help in that system.I’m healthy and ready to play now”

Many of these players would be available to the Cavs via trade or free agency and any player would be interested in becoming a part of Cleveland’s frontcourt. However, the Cavaliers have insisted that they are in no rush to try and find a replacement for Varejao. David Blatt and the coaching staff as well as team management seem intrigued with the possibility of playing small ball as the team defense improves. Tristan Thompson seemed to be the likely candidate to take Varejao’s place in the starting lineup in the Christmas Day game against the Miami Heat; but Blatt elected to start Mike Miller and Shawn Marion alongside Kyrie Irving, putting LeBron James in the familiar Power Forward position he played in Miami with Kevin Love at Center. Miami also went small in that game with Shawne Williams at Power Forward and Chris Andersen at Center. In Friday’s game against the Orlando Magic, Blatt started Thompson started over marion and played 40 minutes, finishing with nine points and 13 rebounds.

The Cavaliers could start Thompson at Center and have Love at the Power Forward, but would have no big men to bring off the bench which could spell disaster if teams continue to play big against them. Bringing Thompson off the bench would likely be the better move, allowing Love, Irving, and James to each have a backup to give them some rest. This small ball tactic, albeit some teams success with it, will likely not be able to take the Cavaliers far into the postseason. The Cavs are going to have to make a move.

It is believed that the Cavaliers will use their trade exception from the Keith Bogans trade as well as Brendan Haywood to take on a decent center and his contract. Cleveland would like to avoid trading away the valuable scorer off the bench in Dion Waiters and with the thin frontcourt, Tristan Thompson is virtually untouchable at this point.

That would also leave us with the chance to sign one of the free agents mentioned previously. The Cavs know what each player brings and know their serviced could be best served here in Cleveland. Emeka Okafor is recovering from a herniated disk in his back and is not expected to sign until late January or February. Jermaine O’Neal, who has been spending a lot of time with family to start this season, has received interest from the Warriors and Cavs, but is highly intrigued with the Mavericks now that they’ve had the move to add Point Guard Rajon Rondo. The Cavs still give him the best option for playing time, but it remains to be seen who he chooses. The last mentioned free agent is Kenyon Martin, who has always been effective when on the floor and has kept in basketball shape for interested teams. He last played for the Knicks alongside Tyson Chandler where they were a force defensively.

Whatever the Cavs choose to fix up the wound, playing small ball seems a band aid until they decide how to proceed. Keeping Thompson on the bench would be the best idea due to the lack of bench support; Thompson should still see 30+ minutes per game. If and when the Cavaliers decide to sign or make a move for a big man, Thompson could see a starting role where he’d still play significant minutes.