How one special play came to be for LeBron James 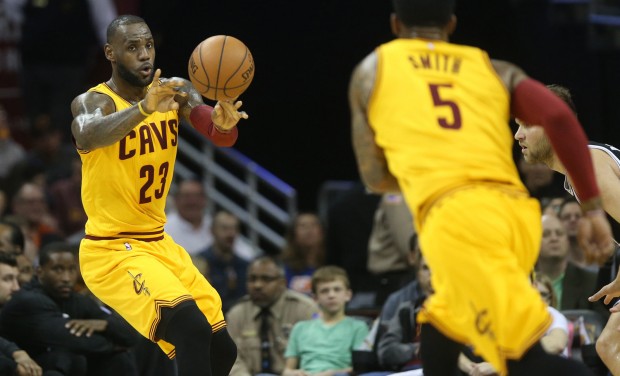 Over the course of an NBA game, coaches call dozens of plays. Some schemes are executed with precision – others are better off forgotten.

After serving 11 seasons in the NBA, Cleveland Cavaliers Head Coach, Tyronn Lue, has seen his fair share of plays. Now, in his second year at the helm of the Cavaliers, Lue is drawing up some excellent game plans for his team.

One play in particular, “Punch Snap Hammer,” is a fine example of Lue’s tactical expertise. If you’re a solid Cavs fan, you may’ve seen the play ran.

On October 29th, the Cavs hosted the Orlando Magic inside Quicken Loans Arena; the third game of the season for Cleveland, resulting in a 105-99 victory for the Wine and Gold. At the 5:13 mark of the second quarter, Coach Lue called his now-famous play.

In the official box score, the play is simply recorded as “Dunleavy makes three-point jumpshot, assist from James,” but those words do it no justice.

Dave McMenamin recants the play-call in his recent article with ESPN.

Coming out of a timeout, Kevin Love has the ball at the top of the key and throws a swing pass to J.R. Smith on the right wing. Dunleavy comes from the baseline up to the opposite wing. James, with Aaron Gordon on his hip, swaps positions along the baseline with Tristan Thompson as James goes from the left block to the right block and Thompson goes from the right block to the left block. Smith throws an entry pass to James in the short corner, which starts the action.”

James receives the pass from Smith and immediately puts it on the floor, driving toward the baseline.

With Elfrid Payton’s head turned toward James, Thompson sets a “hammer” screen on Payton — who is guarding Dunleavy — to allow the Cavs veteran shooter to scoot out to the corner unguarded. What’s a hammer screen? Hammer describes the action of the play, more so than the variety of screen. Typically, it involves a post player setting a back screen for a wing player on the opposite side of where the ball is. Rather than the wing using the screen to roll to the hoop, however, the wing player will cut to the corner of the court for a catch-and-shoot opportunity and receive a baseline feed. Before Dunleavy starts his cut, James throws the pass — a one-handed, wraparound bounce pass — that covers about 45 feet.

There are two options on the play. James either looks for Thompson, who rolls after setting the screen, or goes for Dunleavy.

Because of the timing of the play, it is Thompson’s responsibility to set a solid screen to free up Dunleavy, or else James’ pass will sail out of bounds, resulting in a turnover.

Dunleavy catches the ball in the corner and goes right into his shot, swishing home the 3 as Payton tries to recover and close out on him to no avail.”

McMenamin spoke with James after the game.

I’m always kind of throwing different passes. Figuring out ways to kind of get the ball over there. I went with the four-seam. I think I went over it with Mike maybe once or twice. Maybe.

If you come out of the timeout, we work on stuff at practice where it’s timing, timing to a T. Execution. Because if you expect for your guy to be there, then he has to be there. And I trusted that once I received the ball, our timing is perfect, and I just let it go.

There is probably like five or six different hammers in the NBA. That’s just one of them. We ran one in Miami as well in Game 6 when I missed a 3. That was a hammer action too, but it wasn’t the same option. I set the step-up for Rio (Mario Chalmers), and then he took (the screen) down, and then they came up and got me, and (Chris) Bosh got the rebound. So, that’s a hammer. There’s different types of hammers, but that one to Dunleavy was unique.”

An appreciative Dunleavy spoke to McMenamin with regards to the play.

Probably since training camp started, (we practiced the play) maybe three times, four times in six to eight weeks. Not a lot.

A lot of times when teams run that play, the guy getting the shot usually will go early and be there waiting for it. It’s better to be a little bit late, and the ball will be getting there at the last second. But the angle that he threw it at, he just had blind trust. He hoped I’d be there.”

Coach Lue was proud of his team’s execution in a post-win press conference.

We had it last year, we just never ran it,” Lue said. “We didn’t really have a lot of time to work on the timing of it. I thought we had a chance this year, having a training camp and just continuing to work on it six to seven times and just getting the pass down, getting the timing down, and then we were just able to execute it in the game.

“There’s not many guys that can do that. And then the read is, if the 5 helps, then you got Tristan (Thompson) slipping down the middle of the paint. So, it’s really a double read, and you got to be able to read the defense and LeBron with his passing ability and his height and the God-given talent he has. He’s able to make either read, so I trust putting it in his hands and executing the play.”

James’ on-court vision is unparalleled. So far this season, The King is turning in some of the best statistics of his illustrious career (25.6 points, 8.6 assists, and 7.8 rebounds per game). Partnered with a brilliant head coach and teammates who can make opposing sides pay for defensive lapses, James and the Cavaliers are showing no signs of slowing down. 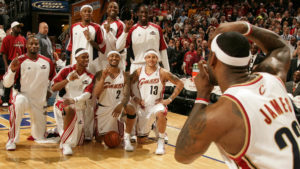