How Likely Is Andy’s Injury Career-Ending? In the last five years, this 2014-2015 season included, Anderson Varejao has suffered four season-ending injuries as well as one moderate injury that sidelined him for a month. In the 10-11 season, after only 31 games, Varejao’s season was ended complements of a torn tendon in his right ankle. In the 11-12 season, Varejao averaged 10.8 points and 11.5 rebounds over 25 games, but broke his wrist in early February, missing the rest of the season. In the middle of the 12-13 season, it was announced Varejao, averaging a wild 14.4 rebounds, would missed the remainder of the season after being hospitalized for a blood clot in his lung. Throughout the 13-14 season, with Andrew Bynum and Spencer Hawes, Varejao lost some of his minutes and sat out a month due to back soreness. However, the Wild Thing played 65 games and averaged 8.4 points, 9.7 rebounds, 2.2 assists, and 1.1 steals. Now, in the 14-15 season, Varejao has suffered a torn Achilles tendon. With a track record such as this, many are beginning to speculate, and fairly I might add, this torn Achilles may be Varejao’s career-ending injury.

Three notable NBA players who’ve also suffered from ruptured Achilles’. Wilkins (Injured at 32) went on to two more All Star appearances and Brand (Injured at 28) signed the biggest contract of his career after his torn tendon. The only exception here is Billups (Injured at 35), whose career was practically ended due to the injury; his correlation might be stronger to Varejao’s due to their age similarities. (NBA.com)

A torn Achilles is a very serious matter, but for most, the definition of the injury itself remains a mystery. The Achilles is the thickest and strongest tendon in the human body, connecting your calf muscle to your heel bone. Consequentially, the status of one’s Achilles’ tendon has a direct effect on a player’s speed and quickness; such injuries to the tendon can result in complete immobilization and have long-lasting effects if not treated properly. Coming back from such an injury is an extremely daunting and exhausting task, which gets more difficult with age. The average age of players who have suffered Achilles’ ruptures is 29 and have 7.6 years of league experience. Varejao is 32-years-old with about 10 years of league experience (not including overseas play). Clearly, by age and experience, the odds are not in Varejao’s favor. However, it’s worth mentioning that a great player has defied these odds and is still a force to be reckoned with in the NBA: Kobe Bryant.

Last year, during the 2013-2014 NBA season, Kobe Bryant suffered a third degree Achilles’ rupture. Kobe Bryant was 34-years-old and had logged approximately 54,041 minutes in his 17 years in the league. With the exception of Bryant’s 13-14 season, in which he played only six games, Kobe averaged approximately 26.9 points in the four seasons prior to the injury. This season Bryant is averaging 24.6 points over 27 games. Now, his Achilles injury isn’t affecting his play any more than his age. While it will be a hard road for Cavalier #17, Kobe has shown that the will of mind, patience in rehabilitation and determination to play the game you love again can bring out the best of the flesh.

“It’s not how many times you get knocked down that count, it’s how many time you get back up.” – George A. Custer

Cleveland’s Wild Thing is truly resilient. While Achilles may have only been as strong as his heel, Andy has proven stronger. Varejao has successfully bounced back after injuries time after time over the past four seasons; this time shouldn’t be any different. Varejao clearly loves to play basketball, and loves to be a Cleveland Cavalier. If he didn’t, he would’ve called a quits after one of the previous seasons when hope for the Cavs was at all-time lows. Right now, the Cavs confidence is at all-time highs. The development of Kyrie, return of the King and acquisition of Love – the dream of a Cleveland championship has never been more real. Varejao, like all 15 members on the Cavs squad, is motivated by a hunger that can only be satisfied by an NBA championship; he won’t throw in the towel when the dream is so close to reality, especially after being a Cavalier for ten years. There shouldn’t be any doubt that the Wild Thing will play the sport he loves for the city that loves him as long as it’s humanly possible. 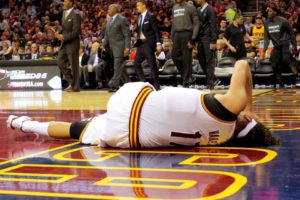