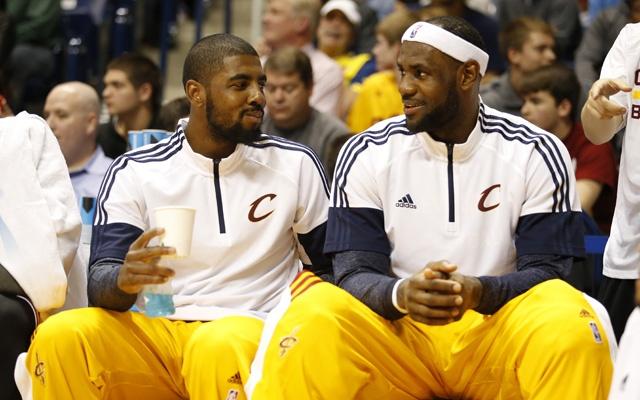 The 2015-16 NBA season hasn’t even started, and the Cleveland Cavaliers may already be facing some adversity once the season begins. Chris Haynes of Cleveland.com is reporting that Kyrie Irving is unlikely to play in the season opener against the Chicago Bulls and to make matters worse, might even be out until January.

“When the three-time All-Star underwent surgery in early June, his recovery time was set at 3-4 months. Assuming he is sidelined outside of that four-month window, the thinking is that it would have everything to do with the Cavaliers being patient and cautious rather than the injury not healing.”

The precautionary measures possibly being taken by the Cleveland Cavaliers just goes to show that the Cavs are in no rush to bring their star guard back. Doctors will more than likely clear Kyrie Irving to play by opening night. However, the Cavaliers have to protect their investment and prized NBA All-Star point guard from further injury. Irving sustained minor injuries throughout the season, but this freak injury was caused by incidental contact by a defending Klay Thompson in Game 1 of the NBA Finals.

Kyrie Irving had surgery later that weekend on June 6th to repair his fractured left kneecap. In Irving’s particular case, the three-to-four month timetable he received would put him back on the court in October, but that’s really a best case scenario. With the Cavs’ training camp starting in mid-September, Irving is highly unlikely to participate in any of parts of those practices.

However, the Cavaliers are thinking long term, and Irving is the Cavs future star of the franchise, and that should not be taken lightly. In July of last year, Irving signed a contract extension that will keep him with the Wine and Gold until at least 2019. This was a 5-year, $90 million dollar extension with an early termination option for the 2019-2020 for a guy who hasn’t played a full, 82-game season in his four-year career. The closest he came was 75 games this past season, and then he still had to miss seven crucial games in the postseason against the Chicago Bulls, Atlanta Hawks, and Golden State Warriors due to injuries.

Irving is very valuable to the franchise and the Cavaliers want to make sure his knee is 100% to gear up for another NBA Finals run. We’re sure that any Cleveland and Cavs fan would rather win the last game of the season than the first game of the season. Look for Mo Williams, who re-signed with the team this offseason on a two year deal, to step up and fill the starting spot in Irving’s absence. He was also the Cavaliers starting point guard from 2008-2010 and is comfortable playing in Cleveland alongside LeBron James. Also look for Matthew Dellavedova and Iman Shumpert to fill the void left by Irving if he is indeed out until January.