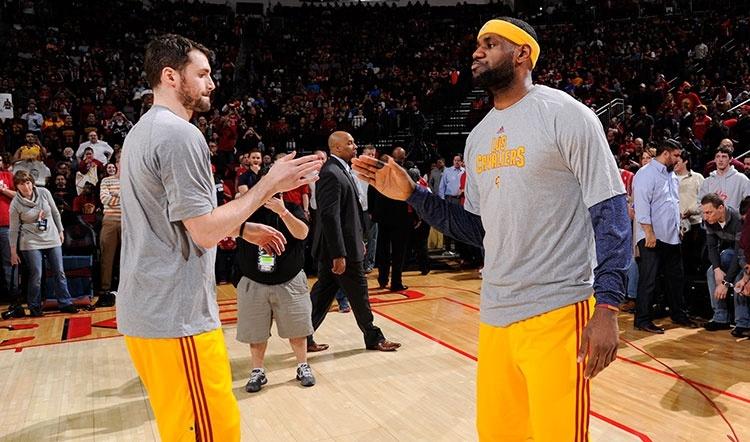 The Big Three are heading into year two with one thing in mind: an NBA Championship.

For that goal to be achieved David Blatt and the rest of his coaching staff must work out a way to feature former three time All-Star Kevin Love more within the offensive system.

When Cleveland traded away two #1 draft picks, Andrew Wiggins and Anthony Bennett, in exchange for the Santa Monica native, Love was a proven player that transformed this team into an automatic championship contender. Nobody really saw the ‘fitting in’ issues coming.

In his final season with the Timberwolves, Love averaged an impressive 26.1 points, 12.5 rebounds and 4.4 assists per game. With numbers like that alongside LeBron James and Kyrie Irving, the Cavaliers were poised to be world beaters, but Love struggled to find his stride early on, and the rest is history.

Love still saw very steady production averaging 16.4 points, 9.7 rebounds and 2.2 assists per game, but was sat entirely on four separate occasions for the entire fourth quarter. The worrying numbers are Love’s usage ratings, and this is something that the Cavs must improve on. That rate dropped from 27.7 in his last season with the Timberwolves, second among all power forwards, to 20.4 in his first season with the Cavs, 20th among all power forwards. A guy with as much talent as Kevin Love must be used on a more consistent basis.

Featuring Love more in offense doesn’t just benefit him, it would take more pressure and physical strain off of LeBron James and Kyrie Irving. Blatt running more plays to find Love in a low post scoring position rather than 24 feet from the basket benefits everybody.

Love saw a considerable drop in his field goal percentage last season, mostly due to the fact that most of his shots were taken away from the basket. Although Love has a great outside touch for a guy of his size, his best basketball is played with his back to the basket.

For every Cavs fan out there, seeing Love and Olynyk getting tangled up was gut wrenching, and couldn’t have come at a worse time. Love was really hitting his stride and finding himself more and more involved in the offense, while the Cavs were looking more and more likely to complete their first playoffs sweep since the Conference Semifinals against Atlanta in 2009.

Regardless, Love decided that his basketball future laid in Cleveland, while some seem to think that the injury may have actually helped Love make that decision.

“I think him being out showed even more of what he means to this team, more than him being on the floor for those 3½ games,” LeBron James said. “It would’ve been huge for us obviously if he was in the lineup, but it gave him the opportunity to put things in perspective and see what his presence can mean to our team. Sometimes you have to take a step backwards to see how important you are.”

Sitting on the sidelines and watching your team fight while you sit their helpless is a horrible feeling, but in the long run may well pay off for Cleveland. The Cavs had an All-Star power forward re-sign on a lengthy contract, and had the fire well and truly re-lit while sitting out during the NBA’s greatest stage.

Love has the ability to be one of the NBA’s best sidekicks, to one of the greatest players the game has ever seen. Numbers and stats aside, with guys like Kevin Love and Kyrie Irving playing alongside LeBron James, the Cleveland Cavaliers should and will be one of the best teams in basketball.

Kyrie Irving gets his time to shine because he handles the ball more often than not, and it’s his job as well and James’ to find Kevin Love in a scoring position that he feels comfortable in. Cleveland gave up one of the elite players of the future to acquire Love and should do everything in their power to make him feel a vital part of the team.