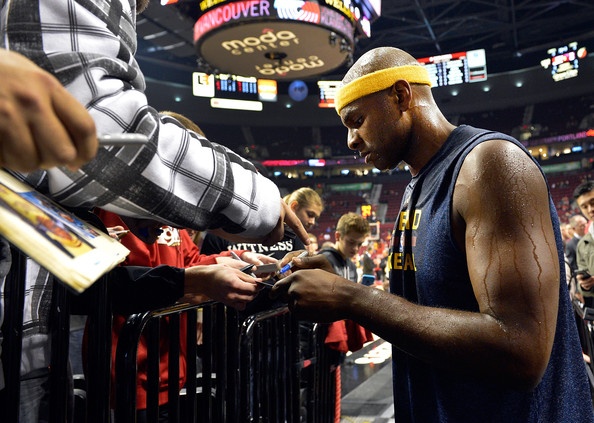 Perhaps one of the most nervous and talked about names prior to and at the trade deadline, Brendan Haywood had one heck of an afternoon on Trade Deadline Thursday.

Haywood, whose $10.5 million contract for next year is non-guaranteed, is seen as a major bargaining and trading chip for the Cavs. Chris Haynes of the Northeast Ohio Media Group explains:

Haywood’s contract is extremely valuable. His $10.5 million salary for next year is non-guaranteed. Whichever team has his rights in the summer could trade him for a player earning approximately $14 million. Then the team acquiring Haywood could release him without owing him a penny if done by Aug. 1.

Before the All Star break began for the Cavs, Brendan Haywood comically suggested that he would stay in his North Carolina home during the trade deadline, staying under the bed covers while occasionally peaking out at the TV screen.

“No joke, I’m popping up squinting to see if it’s saying Haywood or Hayward has been traded. No lie, man. That’s what I’m doing during my break.”

Eager to get past the 3 PM EST trade deadline, Haywood and the Cavs were preparing for their flight to the nation’s capital where they would play the Wizards the following night.

In what was supposed to be a relatively quiet trade deadline compared to years’ past, Haywood’s phone was blowing up with updates as a result of the 37 players who were traded that afternoon, the most in NBA history.

As the players got settled into the team plane headed for Washington D.C., Haywood commented on what it was like for him:

While in the air, despite being with the team and already headed to the team’s next game, Haywood recalled times where being on the team plane didn’t protect him from a possible trade:

“Man, I’ve seen a couple of players traded while they were on the plane. I didn’t think the Cavs would do me like that, but you never know.”

Well, Haywood did make it through the trade deadline with some luck, loyalty from the Cavs, and a little bit of humor as the cherry on top. He said he felt Denver would have been his next team, but that wasn’t the case once the deadline passed.