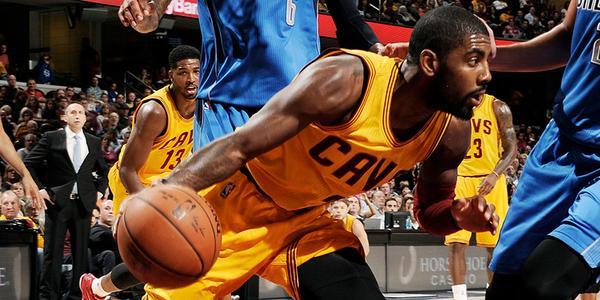 The Wine and Gold fought valiantly Friday night, but to no avail. Their four game preseason win streak was snapped at the hands of the Dallas Mavericks 108-102. The game wasn’t a pretty one for the Cavaliers but they did give themselves a chance to win in the fourth quarter. In a game between his former and new teams Shawn Marion didn’t play a minute of basketball, no doubt the doing of the Cavaliers in an attempt to keep the former all-star and NBA champion fresh for the 2014-15 season. One of the stories of the night was the effectiveness of the Dallas zone defense that did a thoroughly good job of keeping the Cavs offensively off balance, especially once players like LeBron James and Kyrie Irving left the game in the third quarter. In their victory the Mavericks utilized a balanced and unselfish offensive attack in which six players finished in double digits.

The Cavaliers played a game in which they fell behind early and often and couldn’t contain the Mavs offense for most of the evening. For much of the game the Cavaliers simply couldn’t stop the Mavericks big men in pick-and-roll situations, but did however turn up their defensive intensity in the third quarter. Their intensity in that quarter led to offensive flashes, most notably Kyrie Irving’s perfect lob to Lebron James for a thunderous dunk on a fast break in the third quarter. Unfortunately Irving ran over Ellis on his way to lobbing the ball to LeBron. It turned into a nasty alley-oop for LeBron, but they took the bucket off the scoreboard and called a block on Ellis. The dunk electrified Quicken Loans Arena and gave the world a taste of just how potent the duo could be this coming season. In the second half the Mavericks built a double digit lead and never relinquished it. Notable Cavs performances on the evening were LeBron James (12 pts, 4 ast, 2 reb & 1 blk), Kyrie Irving (23 pts, 5 ast, 3 reb & 3 blks) and Tristan Thompson (17 pts & 11 reb). Much to the enjoyment of the spectators and fans Friday night, All-Star MVP guard Irving looked just as electric and consistent as ever in his first action since suffering a lower leg injury last week.

{adinserter 2} The Mavericks played tough and were consistent throughout much of the game. They simply outhustled the Cavaliers en-route to a 44-36 advantage in rebounds, 13-5 advantage in steals and 42-26 advantage in points in the paint. An important statistic to note is that the 13-5 steals advantage by the Mavericks helped fuel their 11-20 turnover advantage over the Cavs. This was highlighted by a five possession stretch midway through the fourth quarter that ended in five straight turnovers for the Cavaliers. They were simply hungrier than the Wine and Gold Friday night and used a combination of stifling defense and excellent ball movement to keep the Cavs off kilter for much of the second half. Though they played a game without many mistakes the Mavericks double digit lead was shaved down to three in the final minutes of the fourth quarter but they were able to settle down offensively and get the shots they wanted to close out the game. Dallas was led by Jameer Nelson (19 pts, 4 reb & 3 ast) and Chandler Parsons (19 pts, 5 reb & 4 ast), two of their biggest off-season additions, no doubt giving Mavs fans a taste of the new flavors they will add to the franchise this season.

The Cavaliers next play the new-look Chicago Bulls in a key central division matchup, this time on the grounds of Ohio State University at the Schottenstein Center in Columbus, Ohio as part of the #AllForOhio preseason tour. Tipoff is at Monday Oct 20th at 7pm.