Head to Head Week 2: Battle of the Backcourts

To get the road trip started, Cleveland will face Portland. In this week’s Head to Head, we look at the battle between these two explosive backcourts with Cleveland’s Kyrie Irving and Dion Waiters duking it out with Damian Lillard and Wesley Matthews.

{adinserter 2}This sharp Shooting Guard matchup will be extremely competitive on both sides of the floor. Dion Waiters will have to be honed in defensively, with Matthews averaging 18.7 points a night while shooting an impressive 53.7% from the floor thus far this season. The help defense has been good early on this season for the Cavs, and will be required against Portland. Nevertheless, Dion should be up for the challenge to take this matchup upon himself.

Meanwhile at the Point Guard position, we have a mouthwatering matchup. Kyrie must still be bitter about the buzzer beater he saw fly over his head in the December 17th matchup in 2013. Lillard hit the game winning three point bucket with 0.4 seconds left on the clock, with Irving right in his face. Kyrie missed the bucket that would have tied the game, and has not had the chance to redeem himself against Lillard since. Very early on in the season, Lillard and Matthews are putting up a combined 32.4 points a night, 5.3 assists and 9.0 rebounds. Kyrie and Dion are right there with them, putting up 32.0 points, 6.5 assists and 5.0 rebounds a night. However it’s not so much the stat sheet that fans will be looking forward to, it’s the on-court theatrics.

Lillard and Kyrie are two of the fastest and craftiest players the NBA has to offer, and we can be sure to see plenty of fast breaks, and ankle breaking crossovers. Both Guards also have incredible shooting range, making this an offensive blockbuster event. The battle of Matthews vs Waiters could very much turn out to be a “anything you can do, I can do better’ contest. Dion is never one to back down from a challenge, as he proved in the Rising Stars Challenge with Tim Hardaway Jr:

One thing is for certain: these guards will have a huge impact on the outcome of the game. Although it’s an early matchup, all games are crucial to both teams for different reasons. The Blazers simply cannot afford to give up many games in an extremely hard nosed Western Conference. Meanwhile the Cavs see each game as a new challenge, a new way to find a team identity and a new day to form team chemistry. This one is going to be fun to watch, Cavs Nation. 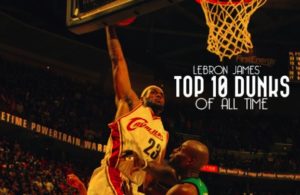