Have the Cavs cracked Small Ball? 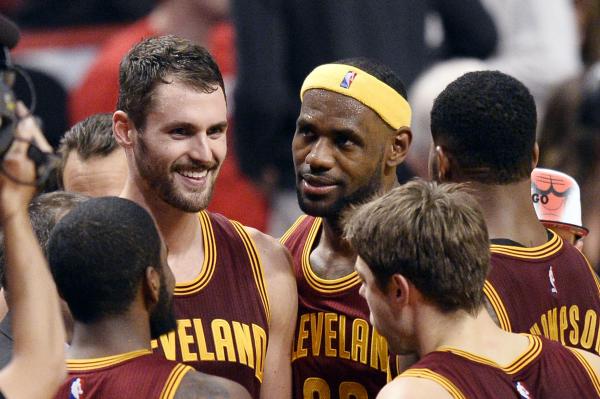 In Game 1’s 28/13 performance, Kevin Love brought his traditional three-point shooting (4-8) and his untraditional (arguably one of the best) defensive performances to his second crack at the playoffs. Kevin Love isn’t “fitting in?” Utter nonsense.

There is no denying that Love is still one of the best stretch 4’s in the game; but it wasn’t Love’s performance at the power forward position that stuck out last night. His true success was found in the trial by fire experience at the Center position. Sports pundits have called out Love in the past for often sitting out during 4th quarters, favouring LeBron at the 4 and Thompson at the 5. This time, Coach Lue took a bold risk with seven minutes left in the 4th of Game 1, matching Love up against Andre Drummond at Center. This risk payed off two fold. Love was able to take advantage of the mismatch against Drummond, being slightly smaller and quicker he rolled into the post against him multiple times. This play, called “Elbow, Wedge, Short” involves running Love through the high post and taking advantage of the defensive mismatch between the two “Centers.”

More importantly than the post and paint dominance, Love has a three-point stroke that can’t be ignored. By stretching Drummond out on the three-point attempt, Love cleared the paint and made lanes for Cleveland’s finest cutters. Stan Van Gundy discussed post game how dangerous pulling Andre Drummond out to the three point line was:

“He spreads floor out and it makes it tough in pick-and-rolls for your 5s to get out there,” said Van Gundy. “We didn’t cover [Love] well, even when we do cover, then we’ve got our center away from basket. We’ve got the best rebounder in the game and we’re playing him 25 feet [from the basket].”

Love at the center provided the Cavs with several other advantages besides just nullifying Andre Drummond. Cleveland’s ball movement has clearly improved with Love at Center. During the 4th quarter, Cleveland clearly employed the Spurs-esque “pass up a good shot for a better one” mentality (except for the occasional Delly Brick, man was he having an off night) and it worked for them. Cleveland outscored Detroit 18-11 while Love played Center, five of those points were uncontested so as to run down the clock, effectively meaning Cleveland was able to produce three points for every one Detroit scored. Another positive of Love at Center is the removal of the intentionally fouling strategy employed by many teams. The Hack-a-Tristian strategy is employed by many teams, and with good use. With a poor free throw percentage Tristian Thompson is an obvious target for teams that wish to stop the clock and potentially only get a one or zero point possession. Kevin Love removes this problem. Being one of the best free throw shooters on Cleveland, this forces opponents to either foul a guard such as Irving (91% lifetime free throw percentage) or LeBron (77% lifetime free throw percentage). Either way, it stifles the annoying defensive tactics employed by teams behind. This strategy is not fool proof, and actually creates like a double edged sword, according to Barry Petchesky of Deadspin. Removing Tristian Thompson from the floor, while giving Love further rebounding opportunities, leaves Cleveland without a true shot blocker on the floor, vulnerable to the same defensive mismatch that Love at the 5 creates for Cleveland. Bleacher Report stated in their playoff preview that the largest issue going forward with the Cleveland Cavaliers is their lack of defensive presence from two members of the big three. Cleveland, like any team, can hide one player who would be taken advantage of defensively on either the shooting guard or staggering their minutes with a defense oriented player at the same position, but you can’t do that with two. Love must have taken that statement to heart because there were several times when his hustle to protect the ball resulted in an extra possession. One such example was the madness play that occurred midway through the 4th quarter. Love drove to the basket with around 5 minutes left in the game, but was tripped up by three defenders. Instead of flailing for a foul, Love protected the ball, fired it out to LeBron, and was moved around again for a clean corner three by Love. What was far more impressive, and telling of things to come was Love’s iso-play against Reggie Jackson. With just around three minutes left in the game, Love was forced to switch onto Jackson, creating a real sense of concern from Cleveland fans who did not like the mismatch. To just about everyone’s surprise, Love didn’t just force a bad shot, he ate up the entire shot clock, forcing an off balance buzzer beater that was so far off the mark. It’s not just that Love took on a tough defensive assignment and was successful that’s telling. Keeping Love on the floor will be critical against the better teams both in the east and the west, and proving that he has the ability to switch onto guards such as Klay Thompson, Steph Curry or Dwayne Wade creates several new plays and sets the Cavs can run against teams that would traditionally try and take advantage of the mismatch. 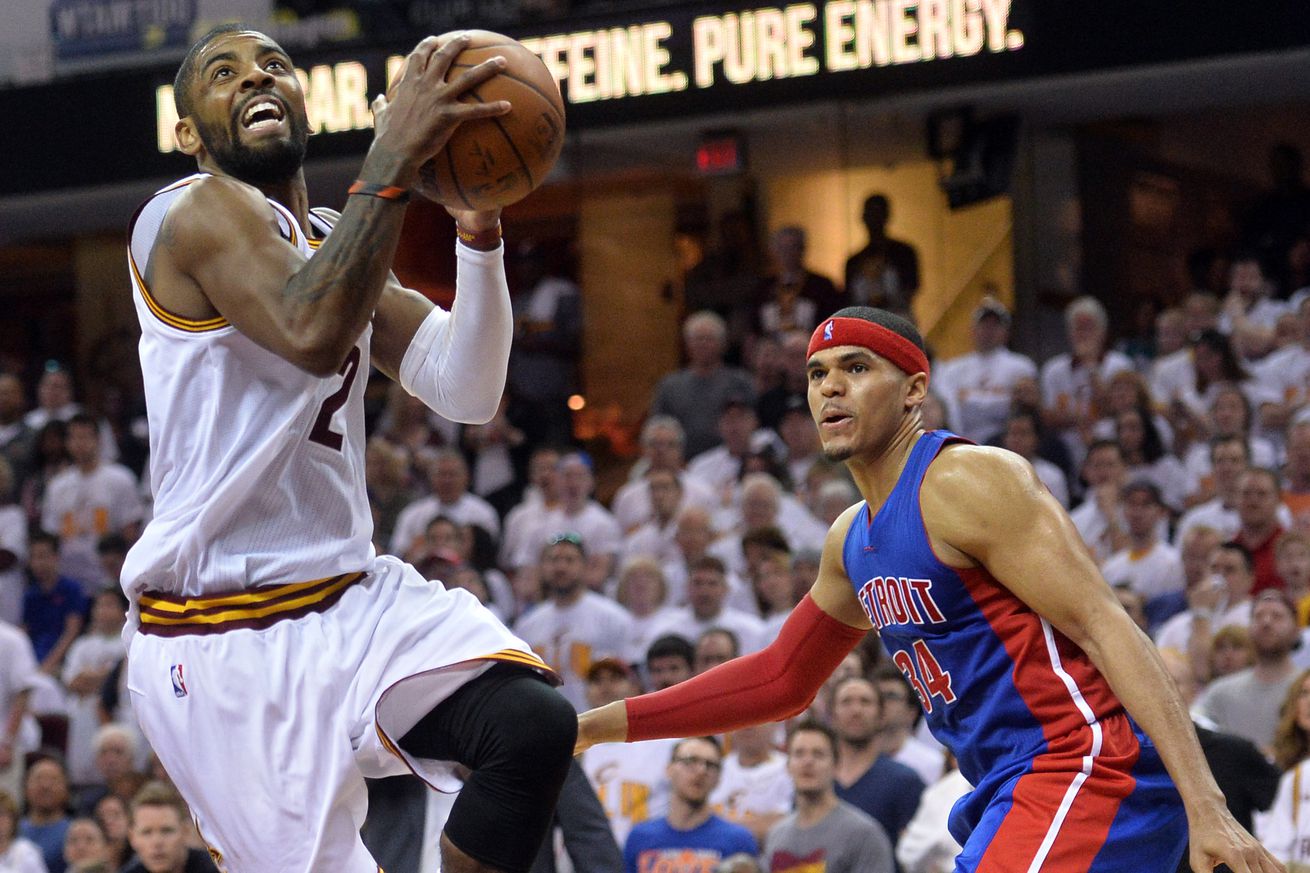 Cavs should stay cautiously optimistic when it comes to Small Ball.

It’s pretty clear that, while tougher than initially expected, Cleveland is going to beat Detroit (Hopefully sooner rather than later). Moving forward, however, Cleveland is going to need more than just star power to beat the next wave of teams. Both Boston and Atlanta skilfully use their deep line-ups to wear down teams while still providing fresh bodies, all of whom can handle the ball as a primary position. Cleveland may look to play large against these sorts of teams, using Channing Frye and Tristian Thompson as well as Love at Center. But it’s not those teams that need to be accounted for. While the Cavs may be taking things one game at a time until they get that final W, the Warriors loom on the horizon, and as much as any Cavs fan wants to believe Cleveland has the best small ball line-up in the NBA, the GS Death line-up simply outclasses everything. However there is something Cleveland could possibly do, and that’s get even smaller. How? LeBron at the 5.

Draymond Green sits at 6-7, about an inch shorter than LeBron James, however in the small ball line-ups Golden State Runs, he is often the Center. Playing LBJ at Center may be risky, but may also shut down the pick and roll that is so useful to Golden State. The issue with LeBron at Center, however, is how niche the role is. Generally LeBron won’t get beat by any offensive player, however putting him on someone like Andre Drummond is simply a death wish. There are few opportunities to test this theory now that the regular season is over; luckily for Cleveland there just might be one on the horizon before the ultimate clash against the reigning champs (or the Spurs, you never know, they’re going to the finals in my bracket). The Raptors signed Hornets castoff Bismack Biyombo, a woefully undersized center during the offseason. Unfortunately for Charlotte Biyombo has been anything but woeful for the boys up north, earning himself real minutes at the Center position. This may just provide Cleveland with an opportunity, as Biyombo is only 6’8, matching up evenly with LeBron James, and providing a real testing ground for the Small Forward/Center flip-flop. Cleveland may also attempt to exploit the age mismatch between LBJ and The Miami Heat’s Amar’e Stoutomire.

The Cavs need to look forward at the playoffs. Seeing the success of their small-ball lineup may make it tempting to simply believe they can rely on that 5 to close out games, however against teams that Cleveland should beat, experimentation should be one of the top priorities. 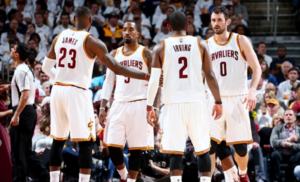 JUST IN: Lessons The Cavs Can Learn From Going Into Game 2 Vs Pistons
Related TopicsNBA Playoffssmall ball