Boston Celtics point guard Kyrie Irving can become an unrestricted free agent this summer if he declines his 2019-20 player option with the team, and a handful of former and current Cavs players believe Irving will sign with the New York Knicks or Brooklyn Nets.

Kyrie Irving told fans at the beginning of the 2018-19 season at the TD Garden that he plans to re-sign with the Celtics. However, this season for Boston hasn’t gone as everyone expected it to. No one knows Irving better than his former Cavs teammates and they believe Uncle Drew has his eyes on New York.

A handful of former and current #Cavs have felt for a while that Kyrie Irving would end up in New York. One I talked to recently for my story said Brooklyn is most likely. Another said the Knicks. Another asked me where I thought and I said Boston. He give me the side eye haha.

Would anyone really be shocked if Kyrie Irving didn’t honor his verbal commitment to Boston? This is the same guy who requested a trade from the Cavs to escape the shadow of LeBron James when no one saw it coming. Irving moves at his own pace and lives in his own world. He’s going to do whatever makes him happy, and it appears that means taking his talents to The Big Apple to join the Knicks or Nets.

After trading Kristaps Porzingis to the Dallas Mavericks, the Knicks created two max salary slots. The franchise has been linked to landing Kyrie Irving and Kevin Durant for some time now. The Nets will also have cap space to sign top-tier free agents. 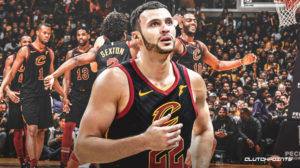