Cleveland Cavaliers fans were understandably upset when LeBron James spurned their team for the Miami heat to try and win his first NBA Championship. When James made his first return to Quicken Loans Arena in Cleveland, boos rained upon him and the Heat as upset fans let him know exactly how they felt about his decision.

Kevin Durant recently returned to Oklahoma City to take on the Thunder, a team he spent nine seasons with after being drafted by them, and he reached out to LeBron James as well as James’ Rich Paul for advice on how to go about the night.

Paul told Durant to hire extra security, which he did, and not respond to whatever the crowd screams at his direction. While Chesapeake Energy Arena was hostile for Durant’s return, it wasn’t nearly as frustrated and loud as the Q for James’ return to Cleveland after his joining the Heat.

Current Memphis Grizzlies head coach and former Heat assistant coach David Fizdale spoke about James’ return, and even recalled the part where a fan threw a nine-volt battery onto the floor.

“I remember coaching LeBron during a dead ball this close to each other and a battery flew between us,” Fizdale told ESPN before the Warriors-Thunder game. “A nine-volt, and hit the floor. It was crazy. I don’t think his situation is as volatile as that. And I think OKC fans, they’re upset about it, but they got like a college fan base. They’re just there to root their team on and really support their team. He’s going to get booed, of course, but I don’t think it will be as volatile.”

Not all fans in Cleveland were violently angry at James, and that one fan’s negative action don’t represent an entire fanbase. The reception in Oklahoma City was similar to that of Cleveland’s but not nearly as bad as the anger Cavs’ fans had towards the way James left them. But hey, the King returned, brought home a championship, and have a good chance to win it again this year if they stay healthy, so all is well in ‘The Land.’ 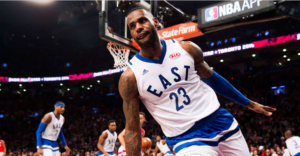