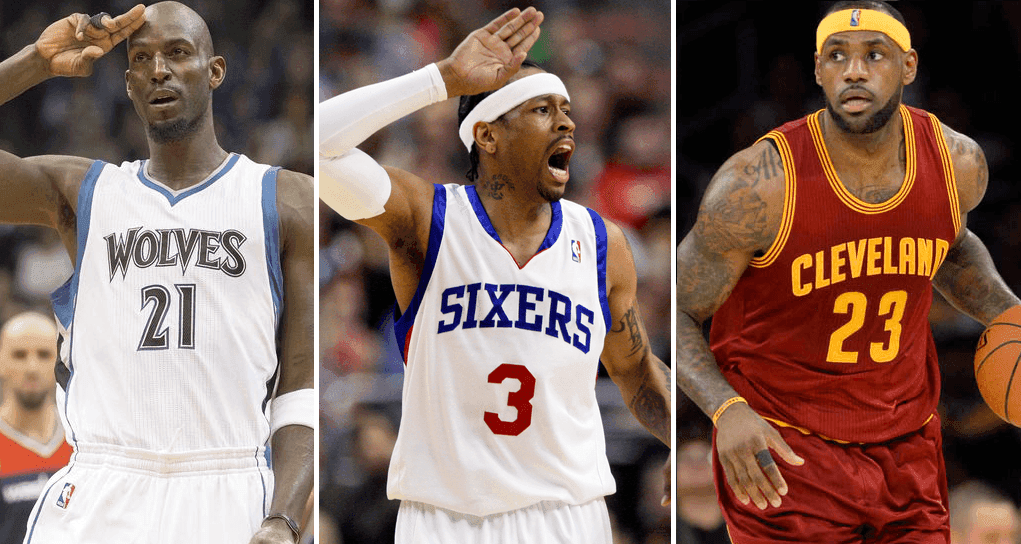 The NBA is quite a melodrama with the way player movements not only affect the lives of the athletes directly involved but also the culture of a city and its team. Just when you think you’re already confident about what’s going to happen, it suddenly hits you in the face. The wheeling and dealing aspect of the NBA has caused heartbreaks, elation, several moments of anxiousness, and a few burned jerseys on the part of fans. There are also stories of players who went the full circle and ended up in familiar locations. Some found their way back by virtue of uncontrolled trades while some chose to return for a better shot at winning or perhaps to complete an unfinished business or simply for a fitting close to their career. We gave focus on these instances as we identified the 10 best player returns in NBA history.

A.C. Green was a bridge between two Laker dynasties that were more than ten years apart from each other. The 16-year veteran spent his first 8 seasons as a member of the Los Angeles Lakers and was a glue guy in the team’s Showtime era. Green was released by the Lakers in 1993 and bounced between two teams in a span of 6 years until he got traded to his original team in 1999. Green went on to start for the 1999-2000 Lakers team that won the first of three straight championships. Outside of his purple and gold pedigree, Green is widely known for being the NBA’s original Iron Man as he played in an unprecedented 8 consecutive 82-game seasons and ending up having played in 99.8 percent of games throughout his 16-year NBA career.

You can find the 10th best return in NBA history on the next page! Before finding a home in Detroit, Big Ben Wallace spent his first four years in the NBA trying to find his niche in Washington and Orlando. But when he stepped into the Palace of Auburn Hills clad in Piston white, Wallace knew it was a match made in heaven. His tireless work ethic and elite defensive instincts personified the culture of the highly successful Detroit teams in the early to mid 2000s. Ben Wallace was the heart and soul of the Detroit Pistons and the pinnacle of his career was in the 2004 NBA Finals where the highly unheralded Pistons defeated the much celebrated Lakers team in a classic David versus Goliath matchup. Wallace left as a free agent in 2006 to join the Chicago Bulls but the bond between Wallace and the city of Detroit was too strong that he eventually found his way back to Motown in 2009 until he retired in 2012.

You can find the ninth best return in NBA history on the next page!

Gail Goodrich holds quite a distinction as he was the leading scorer of the 1971-1972 Los Angeles Lakers team that won an NBA record 33-straight wins. Goodrich averaged 25.9 points, 3.6 rebounds, and 4.5 assists for a team that already had all-time greats Wilt Chamberlain and Jerry West. However, Goodrich did not always enjoy a lofty place in La-La Land as he was a mediocre player in his first three seasons in Los Angeles. He was taken away by the Phoenix Suns in the expansion draft of 1968 and this proved to be the turning point of his career as he went on to become the Suns’ leading scorer averaging more than 20 points per contest over two years. It appeared that Goodrich only needed to make himself ripe for the bright lights of LA once more as the Suns traded him to his original team in 1970 to eventually play a major role in putting the Lakers in the NBA’s history book.

You can find the eighth best return in NBA history on the next page! 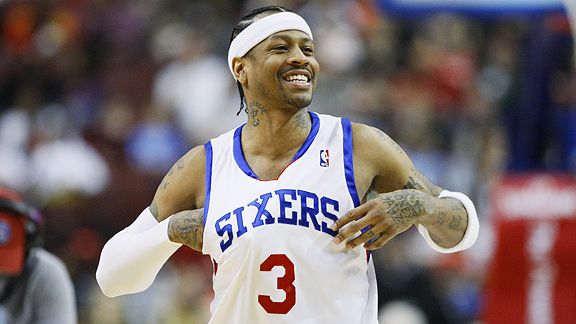 The Answer was drafted by the Philadelphia 76ers number one overall in 1996 in hopes of finally landing a generational player that could lead the team back to prominence. He did not disappoint as not only did he made his mark on the Sixers but in the entire NBA as well. Iverson dominated in ways no one imagine for a man of his size. He led the Sixers to a finals appearance in 2001 – same year he won the MVP award. After reaching the apex, Iverson saw his career on a downward slope as news about his discontent with the situation in Philadelphia prompted the Sixers to trade him to the Denver Nuggets. After one full season of classic A.I. in Denver, Iverson never found the answer to his woes as his play declined along with his brand. Fortunately for him, he was given a second chance in the City of Brotherly Love as the Sixers signed him as a free agent. The offer of redemption saw Iverson in a highly emotional return to the city that made him. Apparently, the move was not for the Sixers to win more games but to patch things up with one of the best players in franchise history.

You can find the seventh best return in NBA history on the next page! Fisher entered the NBA in 1996 along with fellow Laker Kobe Bryant. He was an integral part of their 3-peat champion teams and also became a fan favorite in Los Angeles. Derek Fisher’s numbers will never make someone stand up but his true value to those Laker teams was in the form of invaluable leadership and his knack for hitting timely shots. Fisher left the Lakers to sign as a free agent in Golden State and also made a stop in Utah until he was released by the Jazz, by request of Fisher, so he can best tend to his daughter’s health. He rejoined the Lakers in 2007 and helped the team win back-to-back rings in 2009 and 2010 with his solid veteran presence. Fisher is also popular for hitting an almost impossible game winner against the San Antonio Spurs in the 2004 West Semis with 0.4 left in the clock.

You can find the sixth best return in NBA history on the next page! Jason Kidd’s two tenures as a member of the Dallas Mavericks both had their own interesting distinctions. His first year saw him win co-Rookie of the Year with Grant Hill while his second stint in the Big D proved more fruitful as he was one of Dallas’ most important players in their first ever championship season. Kidd has always shown to everyone his all around skills, uncanny court vision, and basketball IQ be it in Dallas, Phoenix, New Jersey, or New York. Kidd’s exit and come back in Dallas were curiously as part of big multiplayer trades. In 1996, the Mavericks made him the centerpiece of a 7-player deal which sent him to Phoenix. While in 2008, the Mavericks welcomed Kidd back into their fold via a massive 10-player deal which revolved around himself and Devin Harris.

You can find the fifth best return in NBA history on the next page!

Kevin Garnett built his career with the Timberwolves. He put them back onto the basketball map and into the playoffs. He even won an NBA MVP award with the Wolves in the 2003-04 season. In his MVP campaign, Garnett averaged an insane 24.2 points per game, 13.9 rebounds, 5.0 assists, 1.5 steals, and 2.2 blocks per game. Once he was traded to the Celtics, Minnesota fell apart and hasn’t made the playoffs since. Now that he’s back in a Wolves uniform, he’s expected to help bring the franchise out of the bottom feeding portion of the West and into the playoffs. With some young stars and a legendary power forward who brings the best out of his teammates, Minny could be right back in the playoffs very soon.

You can find the fourth best return in NBA history on the next page! LeBron James has had quite some turnarounds as a Cleveland newsmaker, from being revered as the chosen one, to becoming public enemy number one, and ultimately turning messianic. As great a player that he is, the magnitude of his decisions created huge shockwaves to the heart of Ohio. Bereft of a professional sports championship for the longest time, Cleveland struck gold when they drafted LeBron James out of high school in 2003. He did lead seven fruitful years as a Cavalier until that one fateful summer where he was the face of one of the most hated display of self importance in NBA history, announcing his move to South Beach. James went on to win 2 championships in Miami and just last summer, The King decided to return to what’s left of his throne in his home state in hopes of building an experience of a lifetime for every Cleveland Cavalier fan. Despite not yet winning a ring, James’ return has made a huge impact by tilting the balance in the Eastern Conference and setting himself up for continued success in the long run.

You can find the third best return in NBA history on the next page!

One of the toughest warriors in NBA history, Alonzo Mourning became the face of a Miami Heat franchise that was looking to establish its place in the league. Zo went on to build his reputation as one of the best centers of his era and turning the Heat franchise into perennial contenders, winning 2 Defensive Player of the Year awards along the way. However, in 2003 Mourning signed as a free agent with the New Jersey Nets but shortly discovered that he had a severe kidney ailment which forced him to leave the league. The true warrior in Mourning would not roll over because after undergoing a kidney transplant, he made an inspiring return to the NBA. Zo found his way back to Miami’s warm embrace in 2005 when he was signed as a free agent and, despite being a shell of his old self in terms of his overall repertoire, he did not lose his defensive intensity and it proved to be enough to help Miami win its first ever NBA championship in a come from behind series win over the Dallas Mavericks in 2006.

You can find the second best return in NBA history on the next page! Steve Nash was drafted by the Phoenix Suns in 1996 and spent two irrelevant seasons that led to himself becoming a part of a multiplayer deal with the Dallas Mavericks. Nash did not breakout in his first 2 seasons in Dallas either but the 2000-2001 campaign featured a rejuvenated Nash thanks to a good partnership with Dirk Nowitzki and Michael Finley along with trust of Don Nelson. The Canadian point guard enjoyed competitive and successful seasons as a Maverick but in the summer of 2004, he packed his bags back to Phoenix via free agency. Steve returned to the desert a completely different player from the one with the odd hair style. The new Steve Nash still had something going on with his hair but the biggest difference was in his vastly improved game. He brought a whole new level of excitement to the city as the Suns became one of the league’s most exciting teams. Nash won back-to-back MVP awards as he led the small-ball attack of Phoenix which was put into fashion during those years. Despite lacking a championship, the impact of Nash’s return was not limited to the team and city but also to the rest of the basketball world.

You can find the best return in NBA history on the next page! 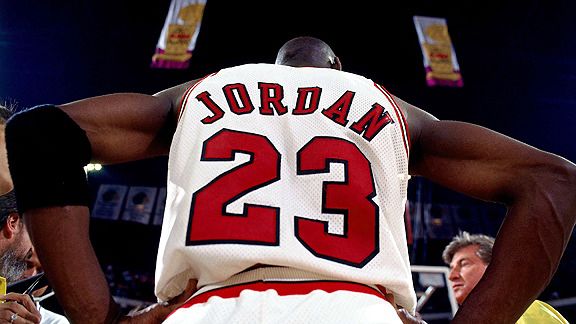 The greatest player to ever step foot in a basketball court was already enjoying an extremely high level of success with Chicago during his first stint in the Windy City, winning multiple awards and championships until he was prompted to retire. However, the burning passion inside the fierce competitor that His Airness is made him return to the game he loves and the result was a 72-win season along with 3 straight championships. Michael Jordan made winning a part of the culture in Chicago.