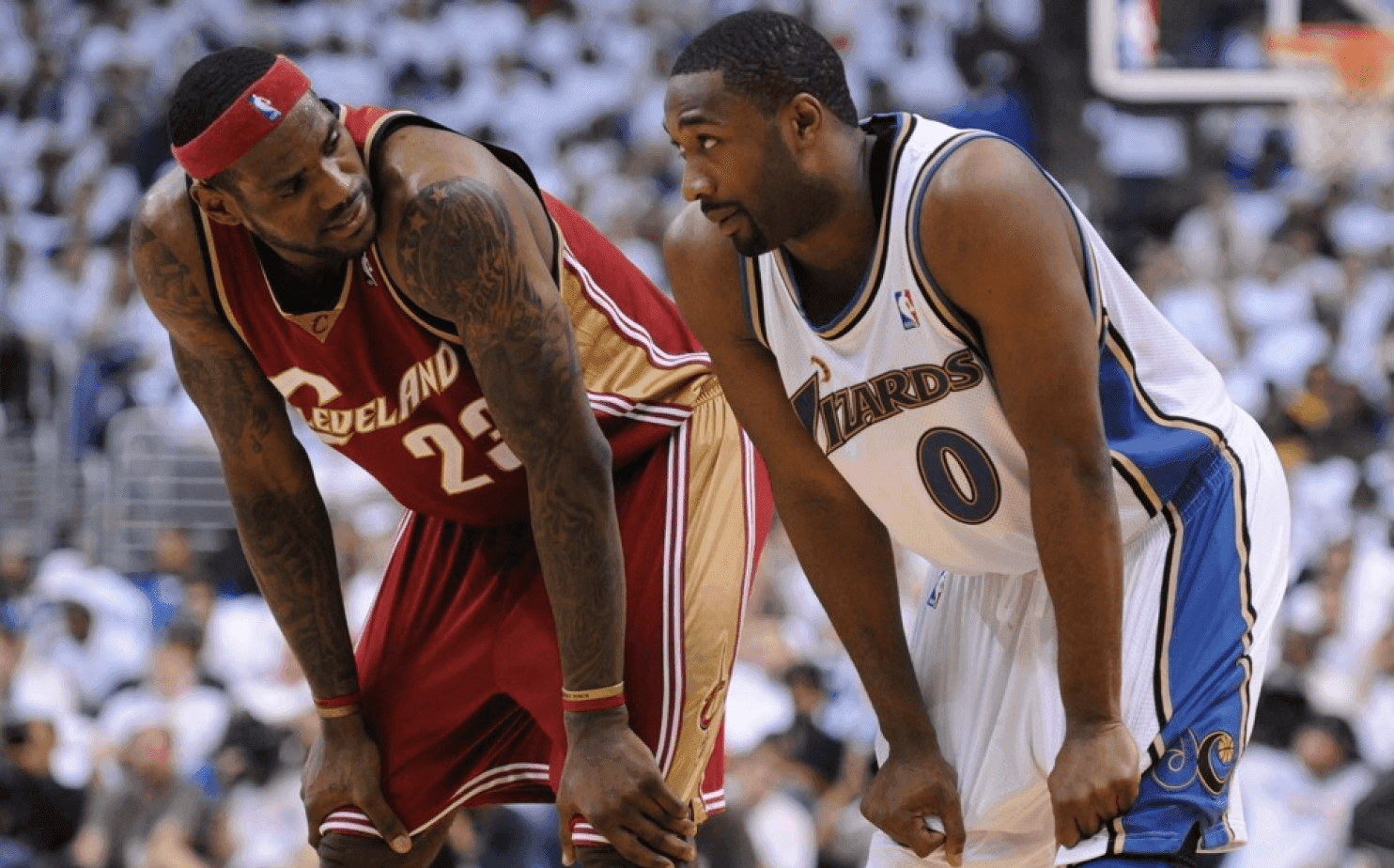 Gilbert Arenas, also known as Agent Zero as well Hibachi, has been out of the NBA since the 2011-12 season when he played with the Memphis Grizzlies. The once big-time NBA scorer, however, has not been forgotten around Cleveland.

During the middle of the 2000s, the Cavaliers, led by LeBron James, and Washington Wizards, led by Arenas, went head to head in three consecutive playoffs. In 2005-2006, the Cavs made their first playoff appearance since the 1997-98 season and defeated the Wizards for the franchise’s first series victory since 1992-93. Cleveland took Washington out in 6 games winning the series 4-2.

In 2006-07, the Cavs swept the Wizards easily in the first round en route to their first ever Finals appearance.

In 2007-08, the Cavs and Wizards met in the first round for the third year in a row, and the Cavs rid themselves of the Wizards with a 4-2 series victory.

On Wednesday, Gilbert Arenas took to Instagram to talk about the NBA and specifically about LeBron James. Here’s the photo he posted as well as the ‘essay’ he wrote to take jabs at James. 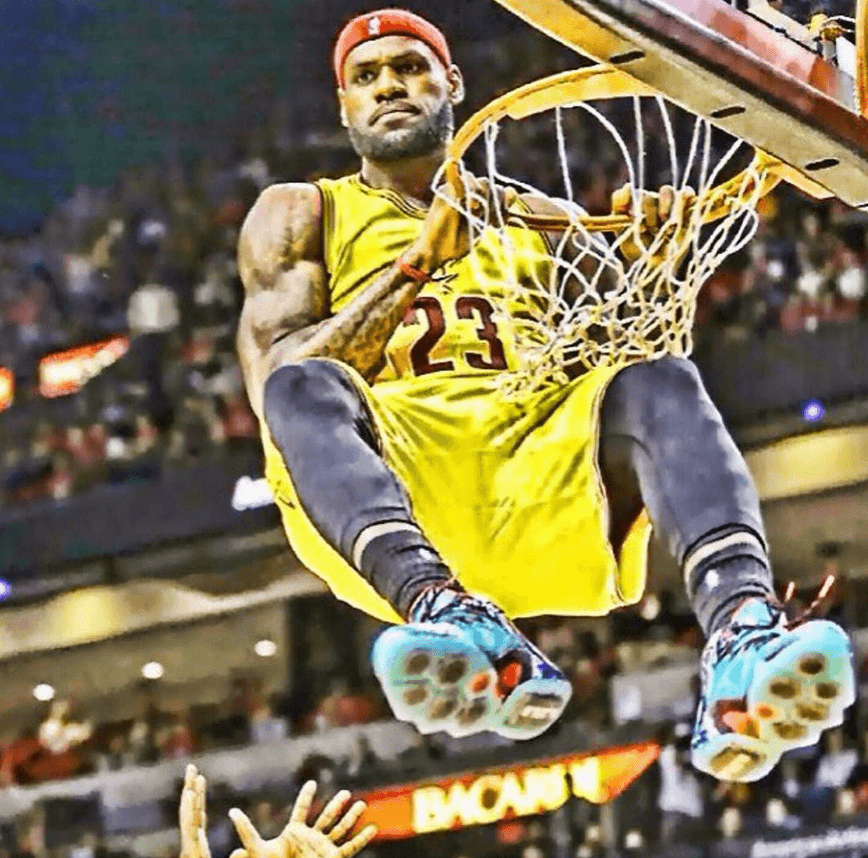 KINGJAMES…..this person comes around once in a blue moon…a man whos so physically gifted he could walk into any sport and be a HOF’ER off his natural (God given ability) last person who was this gifted in sports might have been #BOJackson…LET’S take away EVERY STAT and start from scratch..#NATURAL gifts…6-8..275..44 inch vert…once at top speed can’t be stopped…vision like magic johnson..a natural #LEFTY who plays basketball as a righty….him stepping on a nba floor with no effort stats are 25 6 7…now his WEAKNESSES he had to work on to be the G.O.A.T…James is more like a train then a cheetah in movement.. his first 2 steps aren’t very powerful so this hurt him on iso’s and the ability to blow pass players from standstill position…hints why he’s at the point he needs to be moving at all time so when he decides to attack he’s already in full motion…he doesnt change direction well becuz he doesn’t bend much he plays str8 up and down like #jkidd did which limits him from cross overs and spinning…James isn’t a #1 option..and yes I (didn’t stutter) he lacks #selfishness so he will always need a go to guy like wade was or kyrie.. he lacks what jordan and kobe were..great 1 on 1 players… he needs a pure scorer beside him so he can carry the TEAM load…he gets bashed alot by media becuz he doesn’t take over like #MJ or #KB but #LBJ is MAGIC with Jordan like athleticism..so he walks into stats without trying and when forced he will give u 41 12 8…the finals was the first time in his career he was physically pushed to the limit becuz he had no one to defur to…when players like magic,Barkley and analysis bash him I cringe…like u ppl have no idea what he could do if he had (1) season just 1 selfish season like kobe did in 2005-06 he will avg 40+ 11 9 and no one could do s–t about it…it’s sad the world wont get to see Who I’m talking about becuz his legacy is built on winning…if u doubt what I’m saying..look at every game he was pissed off and was challenged….this man could be the second best 3rd for sure player to ever play when it’s all said and done around 2020+and he didn’t even tap into his ability to be GREATEST..

So in short, Arenas is saying that LeBron James will never be the greatest player of all time because he isn’t selfish enough to go get his own. In order to be like Michael Jordan or Kobe Bryant, James has to stop being unselfish, dishing to All-Stars like Dwyane Wade and Kyrie Irving, and just go get his own.

The only problem is that James is NOT the selfish player like Jordan or Kobe. LeBron is all about winning as a team and getting everyone involved. Sometimes it works, and sometimes it doesn’t. But James has gone to six NBA Finals and won two of them against some teams who were though to be better. In the most recent Finals, James was down two all stars in Irving and Kevin Love who combined for 38 points, 13 rebounds, and seven assists during the regular season. James still averaged 35.8 points, 13.3 rebounds, and 8.8 assists while shooting 33 times from the field per game.

James has never been a high volume shooting guy, as he’s always tried to find his teammates first and foremost. A lot of fans however, will agree that they want James to stop passing too much at times and just attack the defense. He’s always found ways to score when it was needed, so it nothing unfamiliar to him.

But we’re gonna leave you guys off with this: According to Arenas, if James was more ‘selfish,’ than his career averages of 27.3 points, 7.1 rebounds, and 6.9 assists, he would average 40 points, 11 rebounds…and nine assists. Wouldn’t he, in terms of those numbers, still be considered a pretty unselfish player if he AVERAGED nine assists per game?