Giannis Antetokounmpo Wants To Work With LeBron James In Offseason The Cleveland Cavaliers knocked off the Milwaukee Bucks last night and won the season series 3-1. The Bucks won’t be making the playoffs this season, but they’ve been an exciting team to watch because of the rise of one Giannis Antetokounmpo.

VIDEO: LeBron James Posterizes The Greak Freak With Nasty Dunk While Getting Fouled

Chris Haynes of Cleveland.com sat down and talked with the Greek Freak, who said he wants to work out with LeBron James in the summer.

Over the past month, Antetokounmpo has taken over major ball-handling duties and has averaged 18.3 points, 7.3 points, 7.4 assists, 1.3 steals, and 1.6 blocks on 53% shooting. Antetokounmpo knows that James will try to make a deep playoff run and may be limited in the summer.

“It’s not up to me. It’s up to LeBron,” the 21-year-old responded. “I think LeBron has 150 times more things to do than me over the summer. If he has time, I’ll definitely have the time.”

LeBron James heard about Antetokounmpo’s request, and responded to Cleveland.com.

“Absolutely [Giannis and I can get together]. Y’all know I got an open-door policy.”

With James’ approval, you can bet these two forwards will be working out in the summer. Antetokounmpo has an incredibly high ceiling, and at only 21, there’s a lot that James can teach him. Who knows, maybe one day near the end of LeBron’s career, the Greek Freak will be playing for Cleveland. 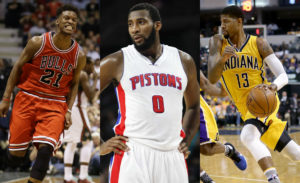