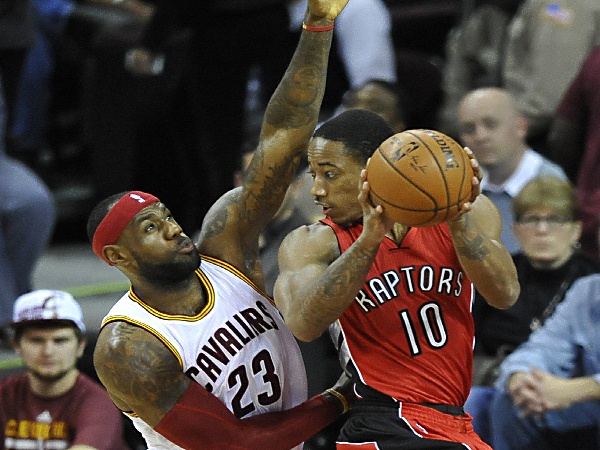 The Cleveland Cavaliers came into tonight’s game looking to end their 3 game losing streak as well as the Toronto Raptors 3 game winning streak. They started off on fire in the first quarter, and then everything went downhill from there. The Raptors came back from a 34-21 first quarter deficit to defeat the Cavaliers 110-93.

The Cavaliers came out with tenacity on defense which led to aggressiveness on the offensive end. At first, it seemed like the Cavaliers would run away with the game as Toronto could not buy a single bucket in the first 4 and a half minutes of the game. They continued having trouble scoring until their bench came in at the 5:53 mark of the 1st quarter and changed everything. Led by Lou Williams, Toronto’s bench scored 51 points the rest of the way and led them to the road win over the Cavaliers.

Here are the highlights of tonight’s game:

{adinserter 2}The Cavaliers jumped out to an early 12-0 lead and were getting whatever they wanted. The man movement and ball movement was splendid in the first quarter. Two of the best highlights of the night came in the first as LeBron James went behind the back to go between 2 defenders to a cutting Varejao for the layup.

Later in the same quarter, James came from the top of the key between the legs and behind the back to Varejao who was cutting once again down the lane and finished at the rim.

At the halfway mark of the first when Toronto reserves Lou Williams and Patrick Patterson came in, the Raptors had 6 points and were down 16. Williams and Patterson would go on to score 13 of the Raptors next 15 points in the quarter to pull within 21-34 at the end of 1. Kevin Love was very involved in the offense from the get-go, scoring on the low block 3 straight possessions with a bank shot, a hook shot, and a layup. He finished with 10 points with 3 rebounds while Varejao had 8 points, 6 rebounds, and 2 assists on 4-4 shooting at the end of the 1st quarter.

In the 2nd quarter, Williams and Lowry came alive as the Raptors quickly cut into the Cavalier lead and, after trailing by 18, brought the Raptors all the way back to a 1 point deficit at 39-38 just 4 minutes into the 2nd. Cleveland and Toronto would exchange baskets for most of the 2nd until the Raptors went on an 11-1 run to close out the 2nd and take the halftime lead at 56-54. Lou Williams scored another 14 in the quarter to have 24 at the half while Lowry picked it up and scored 9 in the quarter to have 12 at halftime. Irving had 18 points, James at 11, and Love stayed at 10 at halftime. The Raptors outscored the Cavaliers 35-20 in the 2nd. Mr. Cavalier Austin Carr tweeted his take on the Cavs bench after they were outscored 36-7 in the first half alone.

Wow never thought Cavs would be in this situation,now it's tough because can't get help off bench

Toronto came out of the half the same way they did after the 1st. After exchanging baskets in the first couple of minutes and were down 65-61, Toronto reeled off 15 straight points, and had a run of 24-2 to lead the Cavaliers 85-67 with just under a minute to go in the 3rd, essentially putting some distance between themselves and the Cavaliers and showing why they have the best record in the Eastern Conference thus far.

#Cavs once led by 18. They now trail by 18 because Lou Williams has 30 off the bench

Cleveland had 4 guys in double figures at the end of 3 with James having 13, Love having 16, Varejao having 11, and Irving having 21. Lou Williams had an astounding 30 points in only 18 minutes at the end of the 3rd and Lowry had 19, joining him as the lone double-figure scorers for the Raptors, who outscored the Cavs 29-17 in the quarter.

The 4th quarter was a back and forth exchange as the Cavaliers deficit continued to stay in the 14-18 range. The Raptors continued to play their game and the Cavs simply had no answer defensively, especially for Lou Williams, Kyle Lowry, and DeMar DeRozan. DeRozan went off for 12 points the quarter to thwart any comeback efforts by the Cavs. Between the Cavaliers’ missed shots and turnovers, Cleveland couldn’t get anything going offensively as they once again struggled for mainly the 3rd quarter and most of the 2nd half. The Raptors won 110-93.

Reggie Miller had this to say about the Cavs following the game:

A lot of games left and long season but have to ask, panic time in Cleveland?? Teams don't fear and borderline respect the Cavs..

Cleveland started off strong but once the Raptors got going, they simply could not be stopped. The Cavs had a lot of trouble guarding the pick-and-rolls, they weren’t rotating to the shooters and drivers, and weren’t contesting every shot. Offensively, their biggest issue is that they simply couldn’t execute against the Raptors in the half-court. They did a great job on the fast-breaks and secondary-breaks, but when the Raptors shut that down, Cleveland struggled to get an open look. Just factor in the 18 turnovers compared to the Raptors 8 and it’s obvious that Toronto was the more aggressive team for much of the game. The Raptors shot 32-80 (40%) from the field whereas the Cavaliers shot better at 35-81 (43.2%). Toronto shot 38-42 (90.5%) from the free throw line while the Cavaliers shot 20-29 (69%). Cleveland outrebounded the Raptors 46-34 and had more assists than the Raptors at 24-20.

For the Cavaliers, LeBron James finished with 15 points on 6-12 shooting, only 1 rebound, added 10 assists, but turned the ball over 5 times. Kevin Love cracked 20 points for just the 4th time this season as he finished with 23 points on 8-16 shooting, adding in 7 rebounds, and an assist without turning the ball over. Love was more involved in the offense tonight which is a good sign. Kyrie Irving had 21 points on 7-14 shooting with 3 rebounds, and 6 assists while turning the ball over 3 times. Irving has now scored 20+ points for the 7th straight time this season, the longest consecutive 20+ scoring stretch of his young career. Andy Varejao had 13 points on 5-9 shooting, 12 rebounds, and 3 assists. The Cavalier bench only scored 19 points tonight which was way less than the Raptors’ bench.

For the Raptors, Lou Williams was the leading scorer off the bench with a career high 36 points on 9-19 shooting, 15-15 from the free throw line, adding 4 rebounds, 1 assist, and 3 steals. Kyle Lowry had 23 points on 5-14 shooting, 11-12 from the free throw line, while grabbing 3 rebounds, and dishing out 8 assists with no turnovers on the night. DeMar DeRozan finished with 20 points on 7-18 shooting, 5 rebounds, 3 assists, and a steal to go along with his 3 turnovers. The Raptors bench scored 51 points compared to the Cavs’ 19, which is basically what won them the game.

The Cavaliers are in the midst of a 5-game homestand and will take on the Orlando Magic Monday night back at the Q. They’re looking to end their 4-game losing streak and get back on the right path.