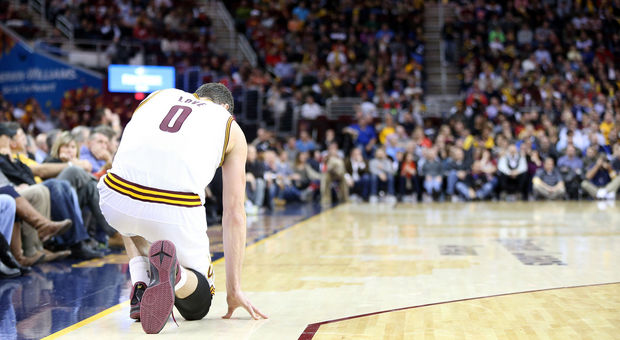 The Cleveland Cavaliers have been a streaky and mildly inconsistent team so far this season. They followed up a 2-game losing streak with a 4-game losing streak, which was followed by 4 straight losses. The Cavs defeated the Magic last Monday and have been winning by a considerable margin over the 3-game streak coming into today. They came in with a 9-6 record.

Milwaukee came into tonight’s road game against the Cavs 3 days removed of their home loss to the Houston Rockets, which ended their 3-game winning streak. They also had victories in 6 of the last 9 games coming into tonight with a record of 10-8, just behind the Cavaliers in the Eastern Conference standings.

Here are the highlights from tonight’s Bucks @ Cavaliers game:

The Cavaliers, and Kevin Love for that matter, started tonight’s game similar to the way they started Saturday night against the Pacers. Love missed his shot of the game, a three-pointer, but that seemed to be all he did wrong in the first. Love had 17 points and 4 rebounds in the first quarter on 6-7 from the field including 3-4 from downtown. He helped the Cavaliers get off to an early 10 point lead with a 13-4 scoring run at 24-14 just under 3 minutes left in the first quarter. They could not get more separation by the end of the quarter as Brandon Knight scored 5 quick points to close the quarter out as the Bucks were down 23-30 after the 1st quarter.

{adinserter 2}Milwaukee continued to put the pressure on the Cavaliers in the 2nd as they got out to a 15-4 run in the first 5 minutes to take a 38-34 lead. After exchanging baskets for most of the quarter, Milwaukee’s lead only grew to 5 while the Cavs got close to a lead at 50-49, but were never able to take it. Love ended the half on a positive note for the Cavs as he put back Kyrie Irving’s miss just before the halftime buzzer to make it a 54-52 Milwaukee lead at the half. The Bucks outscored the Cavs 31-22 in the 2nd quarter. Irving had 7 points in the quarter to lead the Cavs as both teams had very balanced scoring for the quarter. Ersan Ilyasova also had 7 in the quarter to lead his Bucks. Cleveland’s starters were doing nearly all the work offensively as the bench had just 2 bench points for the half on a Tristan Thompson dunk.

The Bucks playmakers got way more involved in the 3rd quarter. Brandon Knight had 3 of his 5 three pointers in the 3rd quarter and “Greek Freak” Giannis Antetokounmpo had 4 points and 3 assists in the quarter as well. Cleveland’s starters kept up the scoring effort as they scored 24 of 27 points. The bucks, however, were able to go on a 13-2 run in the quarter to take an 11 point lead on the road. Sharpshooter Mike Miller came in off the bench to hit a 3-pointer for the Cavs, who were struggling to score from downtown and were only 4-13 (30.8%) through 3 quarters. Down 11, the Cavs raced back into the game and ending the quarter on a 19-5 run. Cleveland and Milwaukee were tied going into the 4th quarter at 79. It was the first time either time had been in a tie game going into the 4th this season, and it was anyone’s game.

LeBron James was the man in the 4th quarter. James had spent most of the game looking for his teammates, but James sensed that his team needed his offense in the 4th, and so he went to work. Alongside Kyrie Irving, who had 7 4th quarter points, James scored 15 points in the quarter, including 9-12 from the free throw line. After grabbing the lead at 91-89, the Cavs were able to hold on and even extend it to 8 points at 103-95 with 1:44 left in the game. Tristan Thompson and Mike Miller contributed 7 4th quarter points Milwaukee attempted a comeback, but it was too late. Miller had a highlight reel block in the quarter blocking Antetokounmpo at the rim. James knocked down 7 straight free throws in the final 33 seconds to ice the game and give the Cavaliers the victory. With James 10 assists, known LeBron hater Skip Bayless weighed in on the King:

Biggest change for Cavs in 4-game streak: LeBron playing point.10 assts tonite. When wants to, can be NBA's best PG, better than CP3.

Cleveland’s Big 3 of LeBron James, Kyrie Irving, and Kevin Love scored a combined 81 points. Irving led the way for the Cavaliers with 28 points on 10-15 shooting, including 8-10 from the free throw ling with 2 rebounds, 6 assists, and only 1 turnover. Love had a double-double with 27 points and 10 rebounds on 10-16 shooting, including 4-8 from downtown and 3-5 from the line. He did have 7 turnovers as well. James also had a double-double with 26 points, 10 assists, and 5 rebounds on 6-15 shooting and 14-21 from the free throw line. He also had 7 turnovers, which is too much if the Cavaliers want to succeed. Shawn Marion was the only other Cavalier in double figures with 10 points. Tristan Thompson and Mike Miller had 6 apiece off the Cavalier bench, while Dion Waiters played only 9 minutes and went scoreless. The Cavaliers as a team had 19 turnovers, but shot 53.4% from the field. They were able to put up 111 points and shot 38 total free throws in the game. Here’s a little inside assists statistics on Kyrie Irving:

For Milwaukee, Brandon Knight led them with a great overall game. He put in 27 points on 10-18 shooting and 5-9 from 3’s, 6 rebounds, 8 assists, and 3 steals. Jabari Parker scored 22 points with 8 rebounds, 3 assists, and 2 steals on 11-15 shooting. O.J. Mayo and Giannis Antetokounmpo both scored 14 apiece for the Bucks. They shot just under 50% on the night at 45-92 and only turned the ball over 13 times. They only go the free throw line 13 times however, where the Cavaliers outscored them by 16 alone. Milwaukee did score 54 points in the paint compared to the Cavaliers 50, so Cleveland is still having trouble stopping opponents when it comes to the painted area.

Cavaliers back-up point guard Matthew Dellavedova is near a return from a sprained MCL, according to Jason Lloyd of the Akron Beacon Journal:

The Cleveland Cavaliers go to 9-7 while the Milwaukee Bucks go to 10-9 on the year. The Cavs finish their homestand 4-1 and go into New York for a matchup with the Knicks on Thursday night. 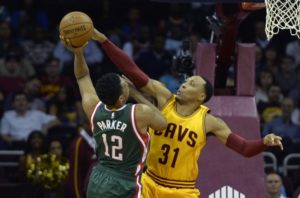