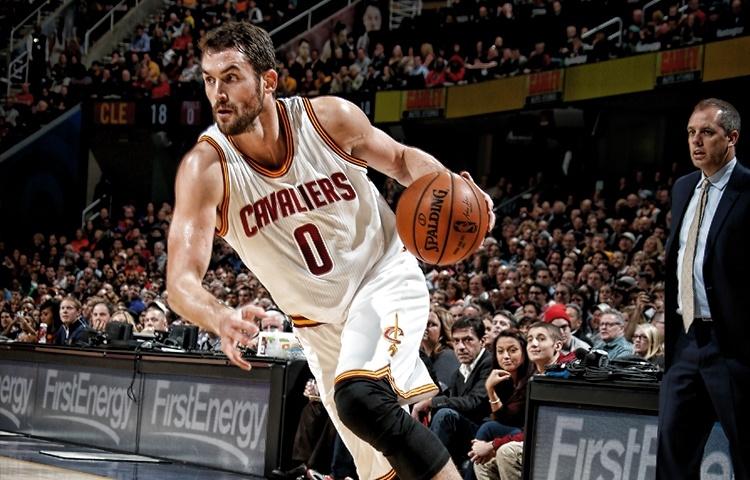 The Cleveland Cavaliers played harmonious basketball yet again tonight against Indiana as they defeated the Pacers 109-97, extending their winning streak to 3 games.

Here are the full highlights from the Cavs victory over the Pacers:

Indiana was coming off of a rare double figure victory over the Orlando Magic Friday night and finished their back-to-back on the road against the Cavs. Coming off of 2 consecutive victories, Cleveland (8-7) faced a depleted Indiana (7-10) team who didn’t have 3 of their core players tonight in Small Forward Paul George (broken leg), Point Guard George Hill (knee contusion), and Center Roy Hibbert (sprained ankle) while also missing their own starting Center Anderson Varejao (rib contusion).

In what has seemingly become the norm, Cleveland stormed out to yet another double digit first quarter lead against the Pacers.

The Cavs have now led by 18 pts or more in the 1st half of each of their last 4 games.

The Cavaliers were getting everything they wanted on the fast-break and in the half court. By the 4:50 mark of the first quarter, the Cavaliers took a 19 point lead at 27-8. Kevin Love made a concerted effort to get it going against David West and the Pacers, scoring 16 points of the first 27 points for the Cavs.

#Cavs Kevin Love scored 16 points in first quarter. That's equal to or more points than he has scored in half the games this season

The ball movement was excellent and the Cavaliers looked to be on their way to yet another blowout victory. Here’s an example of just that, with beautiful no-look pass from James to Irving early in the first quarter.

Indiana’s bench then entered the game, closing the 19 point gap to just 8 using a 13-0 run to trail 29-21 after the first quarter. David West led them in the first with 8 points and kept his short-handed Pacers in the game.

{adinserter 2}The Cavaliers and Pacers remained close throughout the second quarter, as Cleveland couldn’t put Indiana away and Indiana couldn’t gain their first lead of the game. Kyrie Irving led the Cavs in the 2nd quarter with 11 points, but it wasn’t enough to up the Cavalier lead. Indiana’s bench produced 24 bench points (including 13 in the 2nd), and pulled off a 9-2 run midway through the quarter. Although the Cavs were outrebounded 25-21 and outassisted 15-11, they were able to hold a 52-49 halftime lead. Kevin Love led the Cavaliers with 22 points and 6 rebounds. Kyrie Irving had 15 points, 4 rebounds, and 3 assists, while LeBron James had 8 points and 4 assists in the first half. David West was the lone double figure scorer in the first half for the Pacers with 12 points.

After morning shootaround, Irving discussed how the Cavs need to play against the Pacers.

The Cavaliers did just that in the 3rd quarter as they came out on fire, scoring the first 9 points of the 3rd and turned it into a run of 15-5 to get their lead back to double figures at 67-54 with 8:30 still remaining in the quarter. After exchanging a couple baskets, Cleveland went on another run, this time a 13-5 spurt, to take an 82-64 lead with 3 minutes left in the 3rd quarter. Kevin Love had 28 points at the end of 3 on 9-13 shooting, and James and Irving both combined for 38 (19 each), 10 rebounds, and 12 assists on 16-30 from the field while only committing 4 turnovers. Tristan Thompson added 11 points and 7 rebounds filling in for Anderson Varejao as the starting center. The Cavs were extremely aggressive as they got to the free throw line 10 times in the 3rd after going their 14 times in the first 2 quarters. They held Indiana to just 39% shooting in the 3rd, which helped them break out to their big lead of 71-87 after 3 quarters played.

As the Cavalier got nearly no production from their bench in the first 3 quarters (1 point from Dion Waiters), they got their first bench field goal with 10:45 remaining in the game on a Joe Harris 3-pointer.

Cavs defense very strong now, can they keep it up, but bench has to finish the deal, out scored 24 to 1 in first half

Cleveland used yet another run to expand their lead over the Pacers, this time a 12-6 run, to take their first 20 point lead of the night at 99-79. David Blatt inserted Kevin Love at the 7:05 mark of the 4th for insurance, but once the Cavalier lead seemed safe, he came right back out at the 6 minute mark. Cleveland and Indiana exchanged baskets for the rest of the quarter. Indiana outscored the Cavaliers 26-22 in the 4th quarter.

The shorthanded Indiana Pacers played their game offensively, but simply couldn’t compete with the talent and athleticism of the Cavaliers. David West led them with 14 points on 7-6 shooting and 6 rebounds. Solomon Hill had 13 points on 4-11 shooting with 3 rebounds and 3 assists. Donald Sloan had 2 points on 1-8 shooting, Rodney Stuckey had 9 points on 2-6 shooting, and Ian Mahinmi had 7 points and 10 rebounds filling in for the injured Roy Hibbert. The Pacers got 52 points from their bench led by Chris Copeland with 11, as well as 10 apiece from Luis Scola and Lavoy Allen.

Tonight’s player of the game is Kevin Love. When he was on the floor, the Cavaliers outscored the Pacers by 17 points. David Blatt had this to say about Love’s offense tonight:

David Blatt on Love: "I think Kevin is playing the best defense of his career right now … He's buying in"

Your Cleveland Cavaliers take the court on Tuesday December 2nd, continuing their home stand and trying to extend their winning streak to 4 games against the Milwaukee Bucks.