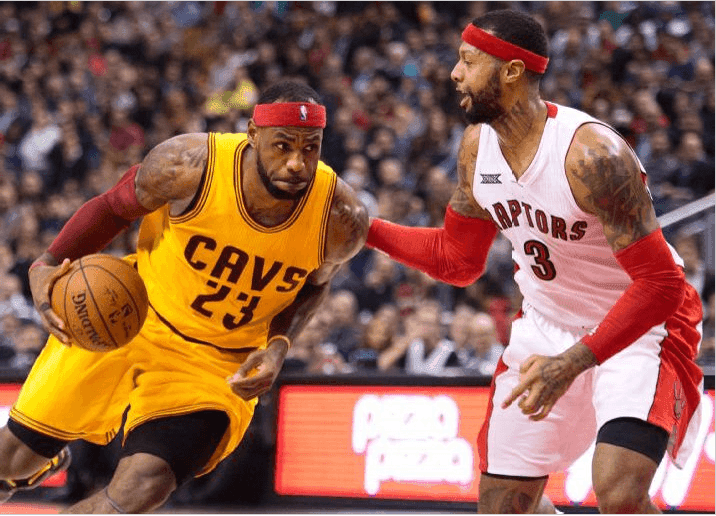 The Cleveland Cavaliers defeated the Toronto Raptors on the road, 105-91, and extended their winning streak to six games.

The Toronto Raptors came into tonight tied for the 3rd best overall record in the NBA with a strong 15-4 record. They were on a two-game winning streak entering tonight’s game with victories over the Sacramento Kings and Utah Jazz, a game in which Kyle Lowry went for a career high 39 points. Since losing DeMar DeRozan to a quad injury indefinitely, Lowry has averaged 31.7 points and 6.5 assists in three games. Here’s what Mr. Cavalier Austin Carr had to say about Kyle Lowry and the Raptors:

Raptors missing DeRozan but they have a deep roster, and after Kyrie Lowry is second best point guard in East.This is a great crowd

v
Here are the highlights from tonight’s game:

The Cavaliers started strong tonight with the play of Anderson Varejao. He scored 7 of the first 15 Cavalier points and they took an 18-10 lead. The Raptors started slow down 7-2, but had good overall balance as both teams got everyone involved. Amir Johnson was very active for the Raptors with 12 first quarter points and 10 of the final 13 points of the quarter for them as the Cavaliers led 30-21 after the first quarter. As a team, the Cavs assisted on their first 8 field goals and 9 of their 11 1st quarter field goals without a single turnover. Kevin Love was 3-3 on 3s in the first quarter. Lowry had 5 points and 4 assists.

The 2nd quarter started with a Varejao turnover followed by a Lou Williams jumper to close to 30-24. Cleveland then went on a 12-5 run to take a 42-29 lead with over 7 minutes left in the quarter led by the bench and namely James Jones. The bench scored 12 straight points with the first 2 on a Thompson score back in the end first. Waiter scored inside and James Jones knocked down back-to-back 3s to start it off. Cleveland couldn’t put them away however, as the Raptors went on a 12-4 run to get within 46-41 with 2 minutes left. Both teams exchanged baskets and the Cavs were able to take a halftime lead of 51-44. Dion Waiters got a late technical for reacting to a foul call that gave Kyle Lowry free throws with just 1 second left in the half. He would knock down the technical, but only make 1 of 2 on the foul shots. The bench was also key for the Cavs in the first half:

Cavs got 14 from the bench compared to 8 for Raps..it will be a huge in 2nd half

The Raptors started the 3rd quarter off hot and the Cavs relinquished their lead with a 14-6 Toronto run and they took their first lead of the game at the 7:13 mark of the 3rd quarter on a Kyle Lowry three-pointer. That was the biggest their lead got in the quarter as the Cavs put up an even more impressive 19-4 run to lead by the biggest margin of the night at 76-62. Kyrie Irving scored nine and LeBron James had eight, including back-to-back three-pointers, in the quarter as momentum shifted from the Cavs to the Raptors and back to the Cavaliers at the end of the quarter. The Cavs were very good at ball protection with only one turnover in the quarter and they took a 76-64 lead into the 4th quarter.

For much of the young season, the Cavs bench has been relatively quiet and ineffective on both ends of the floor. The bench was a lot more involved in this game and even more in the 4th quarter when the Cavs needed them most. Although the Raptors scored the first five points in the quarter, the Cavs bench scored 12 of the first 19 Cavalier points in the quarter as the Raptors attempted to come back into the game. Toronto closed the gap to six points numerous times in the 4th, but they were unable to get any closer as the Tristan Thompson-led Cavs answered by scoring a variety of basket to keep the lead. Thompson had 15 points in a very active 4th quarter and Dion Waiters added two more as the Cavs bench scored 17 of the 29 4th quarter points, leading them to a 105-91 victory over the Raptors, avenging their home loss from just under two weeks ago and extending their season high win streak to six games.

LeBron James was his usual aggressive self, but that was after he got all of his teammates involved. James led the Cavaliers with a casual 24 points, seven rebounds, 13 assists, three steals, one block, and four turnovers in 42 minutes. It was his 6th double-double in the last seven games.

LeBron James has 3 straight games with double-digit assists for the 1st time since Feb. 2010. His longest career streak is 4 straight.

Kevin Love scored 15 points to go along with 13 rebounds. Kyrie Irving scored 15 points with four rebounds, six assists, and two steals. Shawn Marion and Anderson Varejao both had nine to round out the starters. The most impressive player on the court tonight was off the Cavalier bench in Tristan Thompson. Thompson scored 21 points with 14 rebounds and two assists. Of those 14 rebounds, nine were on the offensive end. Thompson is 5th in the league in offensive rebounds at 2.9 per game, an average that is going to increase with tonight’s game. Dion Waiters scored 4 off the bench and James Jones put in 8 of his own, giving the Cavs bench 33 total points. Mike Miller did not play tonight due to a concussion he was diagnosed with last night after getting hit in the head on a follow-through contest by Carmelo Anthony.

All in all, it was a great night for the Cleveland Cavaliers, who not only extended their win streak to six games, but finally got some long overdue production from their bench. The Cavaliers will look to extend their streak and continue their strong play as they take their 11-7 record into New York once again, this time to face the Brooklyn Nets (8-10) Monday night at the Barclays Center.