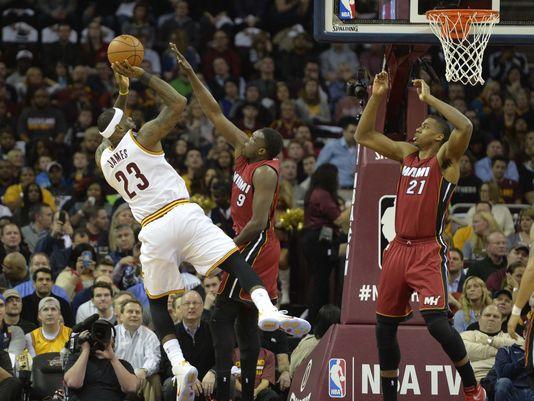 UPCOMING MILESTONES:  With 26 points, LeBron James passes Elvin Hayes for 9th on the all-time career NBA scoring list. With three triples, Kyrie Irving accumulates 600 for his career. Also, with four triples, Kevin Love gets his 800th and becomes the first player to ever have 800 career threes while having a career average of at least 10 rebounds.

After a 32-point win against the New York Knicks on Wednesday, the Cavaliers come back to Cleveland to face the visiting Miami Heat. On the season, Miami is 7-15, and has lost their last three games. A lot of Miami’s troubles have been a result of injuries, with seven players currently having some type of injury and only two players from their opening day lineup able to play today.

On offense, the Heat average the fourth least assists in the league, but also average the sixth most offense boards per game. As a team, the Heat drive to the basket a league high 37.2 times per game – leading to them also having the third highest percentage, 46.0%, of points coming from the paint.

On the other side of the floor, the Heat have excelled at defending the basket. They have held their opponents to a league best 53.6% on shots within five feet of the basket while also averaging the fifth most blocks, 5.8, per game. In addition, they’ve given up the fourth least points off of turnovers and second least fast break points per game. Nothing will be easy against the Heat, especially not around the basket – midrange and threes may be the key for the Cavaliers.

Key players to watch for on the Heat will be Goran Dragic – averaging 18.0 points and 6.5 assists per game – and Hassan Whiteside – averaging 17.6 points, 14.7 rebounds [first in the league], and 2.5 blocks [third in the league] per game. 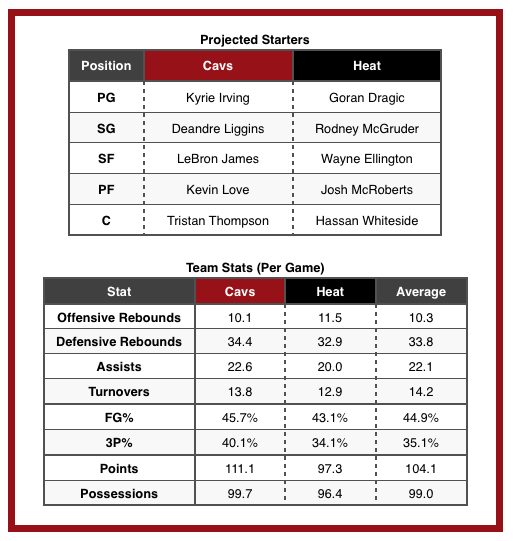