With the Cavaliers’ big three well-rested after sitting out of a 85-93 loss to the Memphis Grizzlies, the Wine-and-Gold welcome the visiting Los Angeles Lakers. The Lakers started this season 10-10, but have lost their eight of their last 9 games, with their only win in that streak coming just last night against the Philadelphia 76ers. This game marks the first reunion between the Cavaliers and NBA-champion Timofey Mozgov after the Lakers signed him in free agency to a four-year $64 million contract – Mozgov will receive his championship ring just before tipoff.

On offense, the Lakers haven’t exactly relied on traditional ball movement – they make the sixth least passes per game and have the third highest percent of their shots unassisted. They average the fifth most points off of pull-up shots per game, 21.5, as well. Although they lack ball movement, scoring is well distributed amongst the players – they have five players averaging more than 10 points per game. The Lakers like to play with pace – averaging 101.5 possessions per game, the fourth highest in the league. Their bench has been highly productive for them, averaging 52.1 points per game – the most in the league and nearly half of their total points. 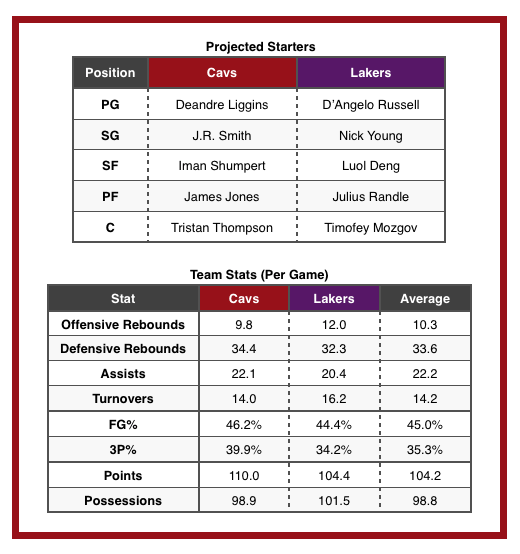 JUST IN: How has Kevin Love improved as a member of the Cleveland Cavaliers?
Related Topics