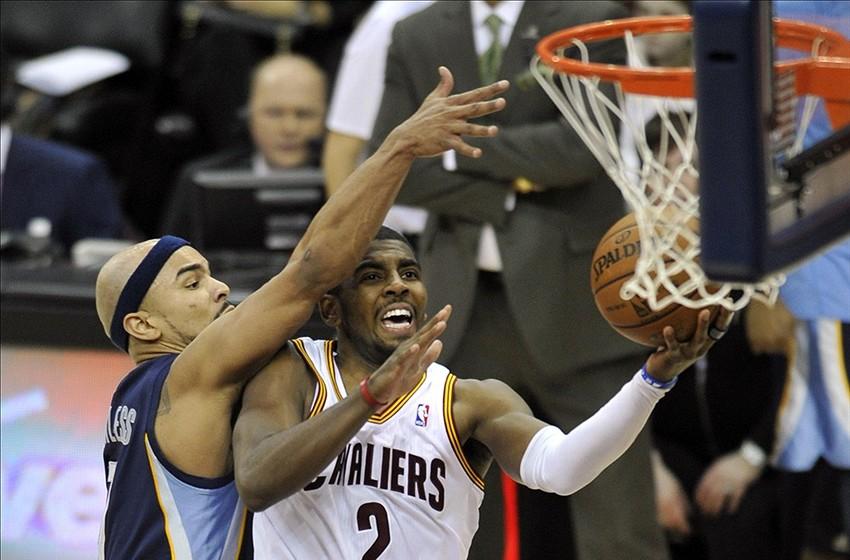 The Cavs’ (5-1) spectacular preseason will draw to a close Wednesday night when they go on the road to faceoff against the second and last Western Conference opponent they’ll face this preseason, the Memphis Grizzlies (2-4). The last time the two teams squared off ended in a decisive 110-96 Grizzlies win on March 1st, 2014 at the FedEx Forum in Memphis despite great performances by Kyrie Irving (28 pts & 3 ast) and Tristan Thompson (18 pts & 8 reb). In their victory the Grizzlies got excellent production out of Zack Randolph (23 pts & 14 reb), Marc Gasol (22 pts, 8 reb & 6 ast) & Mike Conley (29 pts & 7 ast). The biggest differences in the game were the play of the Memphis backcourt (outscored Cleveland’s backcourt 57-41) and the fewer turnovers committed by the Grizzlies. The season would end in a playoff bid for Memphis (they would go on to lose to the Oklahoma City Thunder in seven games in the first round) and another seemingly eventless offseason for Cleveland (little did they know!).

The Wine and Gold come into tonight’s game after an enormous preseason win over the new-look Chicago Bulls Monday night. The Cavaliers used an 11-0 run in the third quarter to take the lead for good in what would culminate in a 107-98 win at home. The game was every bit as entertaining and exhilarating as the hype had us all believing in the days leading up to Monday. In the first game where the Wine and Gold had LeBron James, Kyrie Irving and Kevin Love on the court at the same time one of the biggest highlights was the play of Bulls point guard Derrick Rose. Rose lit up the Q for 30 points, 5 rebounds and 3 assists in one of his most prolific performances since undergoing knee operation. At times he looked downright unguidable, but the Cavaliers did enough Monday night to pull out the win over his Bulls. The Wine and Gold bested the bulls in several key categories: rebounds, turnover ratio, points in the paint, fast break points, field goal percentage free-throw percentage. The Cavs were led by Irving (28 pts, 7 ast & 3 reb), Anderson Varejao (22 pts & 8 reb) and LeBron James (18 pts, 6 ast & 7 reb). All-star power forward and first-year Cavalier Kevin Love also contributed 13 rebounds in the key central division matchup. After their four game win-streak was snapped at the hands of the Mavericks last Friday the Cavs knew they needed to respond, at that’s exactly what they did against the Bulls.

{adinserter 2} The Grizzlies are coming into the game Wednesday off a nearly-identical loss to the very same Mavs team that gave the Cavs their only loss this preseason. The Mavericks won a 108-103 contest in which they had seven players score double-digit points while the Grizzlies had only three players accomplished the same feat. Though many Mavericks played well the most notable performances were those by Tyson Chandler (14 pts & 8 reb), Monta Ellis (14 pts, 4 reb & 3 ast) and Chandler Parsons (11pts, 4 reb & 5 ast). In the loss Memphis was bested by the Dallas in nearly every statistical category: field goal percentage, free-throw percentage, three-point percentage, rebounds, assists, turnover-ratio, fast break points and points in the paint. This might make one wonder, just how did they manage to lose by only six points? The answer is simple, fouls. Memphis attempted a season high 40 free throws, but could only cash in on 28 of them. Interestingly the missed free throws predominantly came from the backcourt (guards collectively shot 65%) and not from the frontcourt (forwards & centers collectively shot 76%), which traditionally is the case. The Grizzlies’ efforts were led by Quincy Pondexter (18 pts & 4 reb), Marc Gasol (17 pts including 5-5 from the charity stripe, 7 reb & 3 ast) and Mike Conley (11 pts, 4 reb & 4 ast).

Wednesday night’s game will be the Cavs finale tune-up and it will allow the Cavs to test their metal against the Mavericks who allowed the third least point-per-game last season. The Mavericks strength lies in their efficient-shooting big men and the gritty play of their gaurds. The Wine and Gold have more than enough talent and experience to win the matchup but it will be important for every single Cavalier to commit to playing tight defense without fouling too much.

The Cavaliers will faceoff against the Grizzlies twice during the regular season: at Quicken Loans Arena on Sunday, December 21st and on the road on Wednesday, March 25th.

Melee Among the Trees: The Grizzlies boast two All-Star big men in Marc Gasol and Zach Randolph, focal points that the Cavs will surely have to pay attention to at all times. The Cavs have pieces like Kevin Love and Anderson Varejao that can help neutralize their advantage but it will be interesting to see how they fare in this initial showdown.

Valuable minutes for Reserves: The game Wednesday night will be the last one of the preseason for the Cavs and the second-to-last for the Grizzlies. This makes it important for both squads to give their reserves ample minutes to gain chemistry with each other and show the coaches what they can do when given an opportunity this season.

Defense without fouling: In Monday’s loss to the Mavericks the Grizzlies got to the line for 40 free throw attempts, a key factor in them having a chance to win the game in the fourth quarter. The Cavaliers will have to do a better job than Dallas did in playing tight defense without fouling too much or the Grizzlies will have another chance to earn an otherwise unlikely victory.
The 8pm tipoff at the FedEx Forum will be televised live nationally on ESPN and locally on SportsTime Ohio.