The Cleveland Cavaliers come back home on the second night of a back-to-back set to take on the surging Toronto Raptors Saturday night at Quicken Loans Arena. The Cavaliers come in with a record of 5-6 and are losers of 3 straight after an impressive 4-game win streak last week. During the 3 game losing streak, the Cavs are averaging only 88.3 points per game. That’s a drastic decrease from their 119.3 points per game during the 4 game winning streak. The Raptors enter tonight’s game having won 3 consecutive games and carry a 10-2 record overall. Tonight marks the first of 4 regular season meetings with the Raptors, who are currently have the best record in the Eastern Conference. Here are tonight’s starting lineups:

The Cavaliers are coming off of a disappointing loss to the Wizards Friday night on the first of their back-to-back set. Cleveland shot just 27-75 from the field (36%) and scored a season low 78 points. Led by John Wall, Washington shot 41-84 from the field(48.8%). The Cavs were also outrebounded 45-41, out-assisted 24-13, and committed 19 turnovers on the night (the starters had 15 of those turnovers). Three players scored in double figures in LeBron James (22 points, 8-21 shooting), Kyrie Irving (22 points, 7-16), and Anderson Varejao (10 points, 4-10). Kevin Love didn’t even manage to reach double figure scoring and was not very involved in last night’s game. Love only took 8 shots on the night and made 3 of them, finishing with a season low 8 points along with 8 rebounds. This after scoring just 10 points with 11 rebounds against the San Antonio Spurs on 4-12 shooting. Here are the highlights of the game:

David Blatt was asked about the loss and what is going on with the Cavaliers, who weren’t expected to take this long to come together collectively and start winning:

#Cavs Blatt: "We’re struggling and we’re a little bit in the dark and we have to find our way out."

This is only part of their disappointing week that includes losses at home to the underwhelming Denver Nuggets (106-97) and the San Antonio Spurs (92-90) followed by the road loss to the Wizards (91-78).

{adinserter 2}With their Saturday night matchup against the Raptors looming, Cleveland is looking to end the week on a high note with a victory over the East’s best team through mid-November. But the Raptors have other plans in mind as they continue their quest for the top spot in the East. Currently at 10-2 and riding a 3-game winning streak, Toronto’s only losses were at Miami where they’ve consistently struggled and at home versus Chicago. They most recently demolished the Milwaukee Bucks at home Friday night on the first of their back-to-back set in a game in which they led 59-109 in the 4th quarter. Prior to that, they defeated the Memphis Grizzlies, who are the best team in the Western Conference, at home with a nice all-around performance.

Since LeBron James departure from Cleveland, the Cavs are 5-9 against the Raptors. The Raptors pose many problems for opponents, so here are tonight’s key matchups to follow:

Kyrie Irving will face off against one of the league’s best at controlling his respected team and the ball game in Kyle Lowry. Lowry comes into tonight’s matchup averaging 18.4 points, 5 rebounds, 5.8 assists, and 1.2 steals per game while shooting 48.7% from the field. Irving comes in with similar averages of 21.9 points, 3.5 rebounds, 4.7 assists, and 1.5 steals on 45.3% shooting. Irving and Lowry represent the different styles of point guards in today’s NBA. Irving is a scoring point guard first who distributes on the side while Lowry sets up his teammates and plays off of them. If he needs to be aggressive, he can always facilitate the offense for himself as well as his teammates. With Irving’s new teammates, he’s still figuring out the balance between when to score and when to distribute, something that should come with time. Look for this game to be a fun point-guard matchup.

DeMar DeRozan blossomed last season as one of Toronto’s go-to guys (the other being Lowry) after Rudy Gay was traded to the Sacramento Kings. Averaging 20 points, 4.3 rebounds, 2.8 assists, and 1.8 steals on 40.6% shooting, DeRozan is not a 3-point shooting guard, but more of a driver and mid-range shooting guard, similar to Dwyane Wade.

His lack of 3-point shooting doesn’t mean that he can’t knock down the 3, but that he’s more effective shooting mid-range shots, driving to the hoop, and making a living at the free throw line, where he’s shot 95 free throws though 12 games, making 78 (82.1% free throw shooting). Terrence Ross is a good on ball defender, 3-point shooter, and a high flier who can finish dunks with the best of them. LeBron James should have no problem getting his offense going against DeRozan, as he’s not known as a great on-ball defender, but the Raptors team defense is what makes him look good. Marion will have his work cut out for him guarding DeRozan, but forcing jumpers while keeping him out of the paint is the best way to guard him (easier said than done). Ross will often times be leaking out on fast-breaks alongside DeRozan for the corner/ wing 3-pointer, so the Cavaliers will have to cut down on the turnovers if they want any chance at defeating the Raptors.

Kevin Love and Patrick Patterson are very similar players as they both play inside but can knock down the 3-point shot. Love will have to get more involved in the offense this time around if the Cavs want to be successful. Love has taken just 20 shots over the last 2 games after averaging just under 19 last season. Of course, the shots were expected to drop, but Love has to be far more involved in the low post where he can attract double teams. Johnson is sort of a workhorse down low and should be kept out of the paint where he is rather ineffective. Forcing him and Patterson to shoot contested jump shots will help the Cavalier defense.

Varejao is the Cavalier workhorse is arguably the most consistent player this season for the Cavs thus far. He’s been solid both offensively and defensively. Jonas Valanciunas likes to go to work early in the game to create space for his shooters. He is however, very prone to get into foul trouble, which is something that the Cavaliers need to exploit and use to their advantage. JV is a solid low post player, but forcing him to shoot the mid-range jumpshots is the key to weakening the Raptors in the paint. All in all, it should be an interesting matchup.
The Cavaliers take on the East’s best Raptors tonight at 7:30 at the Q. Cleveland looks to start a new winning streak while getting out of its 3-game funk. 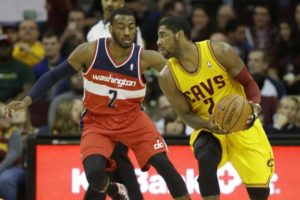