Game Preview: Cavs Take On Beasts Of The East 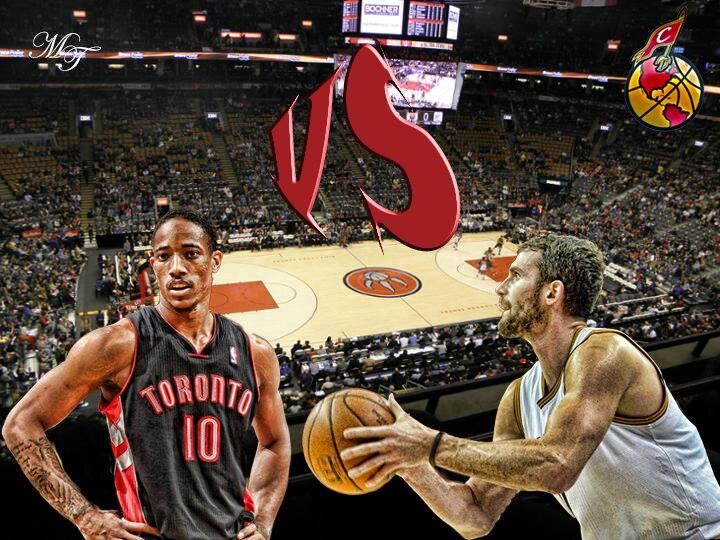 The Cavs are now on a 5 win-streak (10-7) following the 90-87 win last night against the New York Knicks. Tonight the Cavs will be facing the Toronto Raptors in the Air Canada Centre at 7:30 PM EST. Last time these two teams met, the Raptors took control of the game and overcame an 18 point deficit to give the Cavs their 4th straight loss. Even though we have picked up our game recently, what is it going to take in order to extend their win-streak to 6?

Here are each team’s probable starters:

The last time they played, Kyrie Irving put on a show with 21 points, 3 rebounds, 6 assists, and 1 steal and block; but it wasn’t enough to pass through Kyle Lowry and the Raptors. Kyle Lowry put down 23 points in their last meeting. We will be hoping that we will see a little bit of yesterday’s season high 37 point game performance by Kyrie in tonight’s matchup. Lately Kyrie has been averaging averaging 22.4 points and 4.8 assists. Although an elite point guard like him should average over 6, we have seen some major improvements in his passing. On the other hand, Kyle Lowry has been averaging 20.6 points while adding a great 6.8 assists. With the help of Lebron James, the Cavs will probably still be able to execute a good amount of assists. The matchup between these two young point guards will be interesting to see in tonight’s game.

Last time these two teams met, Shawn Marion didn’t have notable performance. With only 2 points off of 1-6 shooting, Marion obviously contributed to the devastating loss in November. With DeMar DeRozan out, it will be Greivis Vasquez’s duty to play team basketball and contribute at his highest potential. Last time the Cavaliers and Raptors met, Vasquez did not put the best performance as well. Even though he scored a decent 7 points, he did so off of 2-7 shooting. This statistic can be improved drastically; and if he does so he would be increasing the Raptor’s chance of ending the streak tremendously. In order for the Cavs to win, the 36 year old veteran will have to try to help out offensively and defensively. It will be fun to watch these two players try to get back in their game based on their last meeting.

Lebron James has been seeking revenge this season, and lately many teams have been paying the price. After Lebron’s infamous homecoming against the Knicks, he and the Cavs stepped up to get the revenge they seeked. In his last game against the Raptors, Lebron scored 15 points off of 6-12 shooting. Although these stats are decent, he did rack up 10 assists which helped the Cavs tremendously. Looking at the Raptors, Terrence Ross had a very poor performance for a player at his level. He only scored 2 points off of 1-5 shooting; he also failed to get a single assist. With the red hot run the Cavs are having, it would be interesting to see what Lebron James has up his sleeve. For the Raptors, it would be essential for Terrence Ross to have a good performance in tonight’s matchup.

Earlier in the season, many people doubted Kevin Love; but recently he has stepped up in times when the Cavs really needed it. The last time these two teams met, Love scored 23 points off of 8-16 shooting and racked up 7 rebounds. Looking at Amir Johnson, he only scored 6 points off of 2-7 shooting and got 4 rebounds. Also Kevin Love has been improving on the defensive end. By watching his games, one can notice that he puts in the effort to dive for the ball or lockdown some players compared to the beginning of the season. With Kevin Love on this great run, currently averaging 17.5 points and 9.6 rebounds, it would be interesting to see how Kevin Love can exploit the Raptors paint while also playing good defense.

In tonights game, Anderson Varejao will be facing Jonas Valanciunas. Both of these players aren’t considered to be star players of their team, but their contribution is key to getting a W. In their last meeting, Valanciunas was one of the few who had an overall good performance. He had 8 points off of a great 4-5 shooting and racked up 5 rebounds. Varejao, who also had a good game, finished off with 13 points off of 5-9 shooting. He also had an exceptional 12 rebounds and 3 assists. If Varejao has the same energy as he did in their last meeting, he would be an important contributor in the Cavs’ pursuit for their 11th win this season.