The Pelicans (3-2) are coming off of an impressive victory Saturday night in San Antonio. They have won the last 3 meetings against Cleveland. The Cavaliers (2-3) are coming off a win in Denver on Friday night which ended their road trip at 2-2. They are beginning a stretch of 9 of the next 11 games at home. Here are the projected starting lineups for today’s matchup:

{adinserter 2}Cavs guard Dion Waiters is coming off of his best game in Denver in which he scored 17 points off of the bench. The Cavs as a team had a season high 25 team assists against Denver after a franchise low of 6 assists against Utah in the previous game. Cleveland currently leads the league in free throw percentage at 82.1% and have attempted the 5th most free throws (28) per game. Lebron James in his career has averaged 25.2 points and 6.1 rebounds per game in 23 career games versus New Orleans.

The matchup to watch is the Cavaliers bigs versus Anthony Davis. It will be interesting to see if David Blatt starts out with Kevin Love or Anderson Varejao defending Davis. Regardless it will be a huge task for whoever is defending Davis as he is widely considered the most skilled and athletic big man in the NBA. Will the Cavaliers continue to move the ball as well as they did in their win over Denver? Can the Cavaliers attack the rim with the presence of Anthony Davis and Omer Asik protecting the paint? New Orleans is only allowing 95.2 points per game this season. 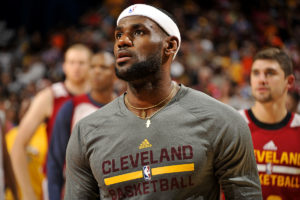