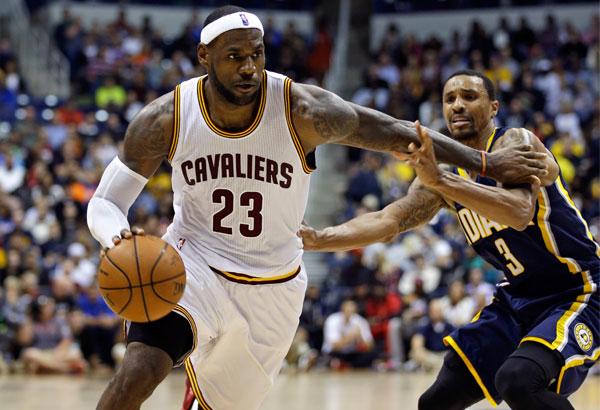 The Cleveland Cavaliers are back to their victorious ways now having won 2 in a row and holding a record of 7-7. Both wins were at home, where the Cavs defeated the Orlando Magic 106-74 and the Washington Wizards 113-87 in the midst of a 5 game home stand (including 8 of the last 9 games at home). The Indiana Pacers come into tonight’s matchup against the Cavs with a 7-9 record and are on the second night of a back-to-back set. On Friday night, the Pacers defeated the Orlando Magic 98-83 led by Rodney Stuckey’s 24 points.

In their miniature win streak, the Cavs are averaging 116 points per game and allowing just 91.5 points per game. In the home losses, Cleveland is only scoring 92.5 points while allowing 110.75 points. LeBron James is averaging 29 points, 7 rebounds, 8 assists, and 3 steals per game in the 2 game winning streak. James looks to lead his Cavs to their 3rd consecutive victory Saturday night and he looks to do it against the current 8th seeded Indiana Pacers. Here are the highlights from the Cavs last game:

Indiana’s record stands at 7-9 as they have lost 4 of their stars this past preseason and offseason. Lance Stephenson chose the Charlotte Hornets over the Pacers, Paul Goerge broke his leg in the offseason Team USA scrimmage, David West made his season debut last night after missing the first 15 games of the season, and Roy Hibbert is questionable for tonight’s game after suffering a sprained ankle against the Phoenix Suns on November 22. With David West as well as Hibbert in the lineup, Indiana becomes a very tough team for the Cavs to handle. West and Hibbert can go to work inside on the low post or in the mid-range, both areas that the Cavaliers struggle mightily to contain.

The Pacers are 6-3 in their last 9 games after starting the season 1-6. They have victories over the Miami Heat, Chicago Bulls, and most impressively the Dallas Mavericks, where they beat a fully healthy Mavs team in Dallas without Roy Hibbert, David West, George Hill, Paul George, and C.J. Watson. Albeit losing George to a season ending injury and Stephenson to free agency, Indiana is not by any means in any sort of tanking mode, as they are trying to develop some of their young bench players and squeeze into the playoffs with the lesser-known team that they have. Here are the highlights from their unlikely road victory over the Mavericks:

"We gotta try our best to dictate our own pace." – @KyrieIrving#CavsPacers [SHOOTAROUND]: https://t.co/WgJTyVwuyvpic.twitter.com/Sw4A1QexAL

LeBron James warned that just because Indiana is down a couple starters doesn’t mean that the Cavs can be lackadaisical:

“It’s going to be dangerous, it should be even more red alert for us. There are guys that don’t usually get the opportunity to play that now go out and play and their expectations aren’t as high. A Frank Vogel team is always going to be ready, especially defensively. They’re going to share the ball, so we have to come out with the same mindset that we had these past 2 games.”

"A Frank Vogel team is always going to be ready." – @KingJames#CavsPacers [SHOOTAROUND]: https://t.co/2jkmdh5nqQpic.twitter.com/P7tFpS2VqF

{adinserter 2}Donald Sloan is playing the best basketball of his career for the Pacers, averaging career highs of 12.3 points, 2.5 rebounds, and 5.0 assists in 32 minutes per game. He’s going to have a tough matchup against Kyrie Irving and the Cavs, but if past games are any indication of the Cavs and how they defend point guards, Sloan could be in for a huge night. Irving will have his work cut out for him defensively, but could also make a living on the offensive end if the Cavs run their offense correctly.

Rodney Stuckey is in his first season with the Pacers coming over via free agency after an up-and-down 7 years with the Detroit Pistons. He’s averaging 16.6 points over his last 5 games and is looking like the scoring guard the Pacers hoped he would be when they signed him. He’s missed the first 11 games of the season due to a wrist injury, but is now back and has back to back 20 points game. Shawn Marion should do a good job keeping Stuckey irrelevant offensively, and holding him to about 10 points will be considered a success. Marion won’t do much offensively, but that’s really not what he’s there for.

Chris Copeland came into the season as the very likely starting small forward for the Pacers, but swingman Solomon Hill has outplayed him offensively and defensively. Solomon Hill does a lot of the dirty work for the Pacers, averaging 12 points, 6 rebounds, and a steal per game. With Copeland on the bench, Indiana’s bench has a developing scoring punch. Copeland is averaging 12.4 points per game while connecting on just over 2 threes per game, but shoots the ball at a dismal 37.3%. LeBron should have no trouble getting wherever he wants on the floor when being guarded by Copeland as he’s a below-average defender. Forcing Hill to put the ball on the floor while Copeland will always be shooting, so making sure he and Hill are taking contested shots will be the key to getting them out of their rhythm.

This is probably the most intriguing matchup of the night. We haven’t had a chance to see too much of David West this season. He played in the preseason, but suffered an ankle sprain that was only expected to keep him out a week into the regular season, but ended up keeping him out of the first 15 games. He scored 18 points with 6 rebounds in just 24 minutes in his season debut, and will be used a lot more tonight to counter Kevin Love. Love is coming off a 21 point game against the Wizards, but with Indiana not having any stretch power forwards on their roster, Love should be the recipient of a lot open looks tonight. Keeping West off the low-block will be the key defensively, something easier said than done, but he will be the go-to guy on this Indiana team this season so there’s a good chance he’ll get his numbers either way. Love will have to be ready to knock down open shots and ignite the fast-break opportunities as Indiana is a brilliant half-court defensive team.

With both Varejao and Hibbert being questionable, but probable for tonight’s game, this matchup will likely be the matchup to watch next to the power forward matchup. Hibbert has been solid this season although somewhat inconsistent. He’s been a force on the defensive end and the low post but is coming off of an ankle injury that has kept him out of the past 3 games. Varejao has been equally solid but has been more consistent than Hibbert this season. With Andy yet to miss a game, he is a game-time decision with a rib contusion after fully going through morning shootaround. If Hibbert plays, he could either have a great game or a horrible game, depending on how much pressure Cleveland puts on him to become a playmaker for himself and his teammates. Varejao, if he plays, will be the usual Wild Thing; rebounding, rolling to the basket, and outhustling his opposing matchups.