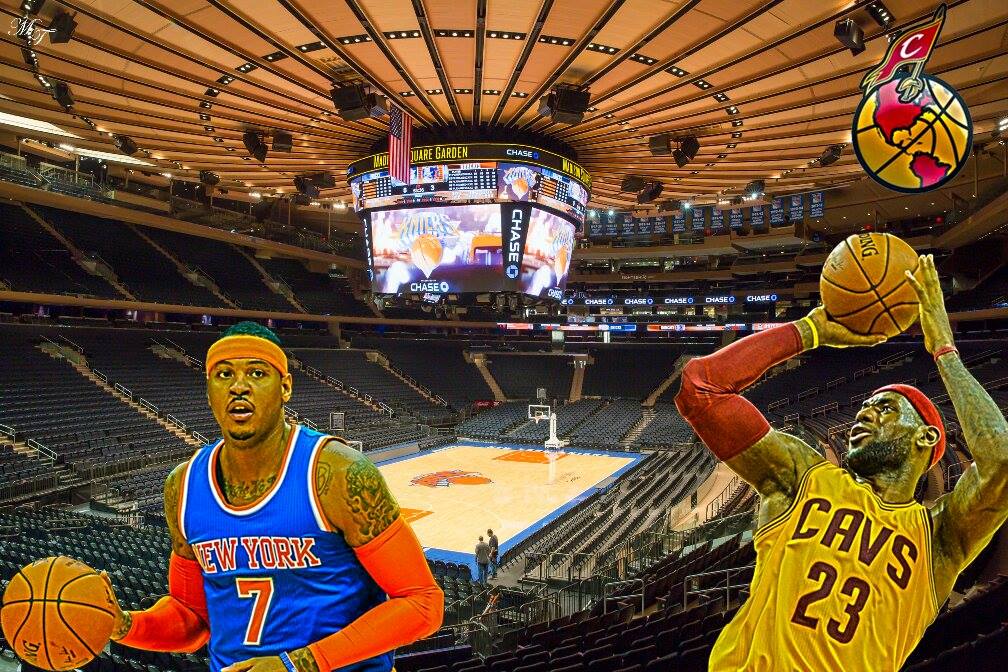 The (9-7) Cleveland Cavaliers take on the (4-15) New York Knicks tonight at Madison Square Garden. The Cleveland Big Three look to take revenge from their season opener loss to the Knicks, 95-90. On that night, LeBron and Co. were shown up by Carmelo Anthony’s 25 points. The Knicks have not been looking as good as they did that night and have since dropped 14 of their last 16 games. With another loss, the Knicks will break a franchise record for the worst 20 game start in their franchise history.

Here are each team’s probably starters:

{adinserter 2}The last time they played, Kyrie dropped 22 points on 15 field goal attempts against the Knicks. He will likely have another big game against the Knicks, as they are notoriously defenseless against elite guard play. José Calderón has been a boon to the New York offense in his 6 games back from calf injury. He has been averaging almost 11 points on a remarkable 51.7% three point shooting. We will likely see Kyrie display a wide array of moves taking Calderón and whoever the Knicks throw at him off the dribble to create easy looks for himself as well as his teammates. The Knicks will have their hands full trying to contain this ball-handling maestro. This matchup will be between a budding superstar and a high IQ savvy veteran.

Shawn Marion and Iman Shumpert will duke it out at the 2. Coach David Blatt has been playing Marion more in recent games and the well-traveled Swiss Army knife of a player has been offering the team small value across many categories. Shumpert, the wing with high potential, has been struggling from the floor in his recent games. In his past 5 games, he has been averaging only 7.8 points on just 29.6% shooting. Shumpert has been off, but may take advantage of the weak perimeter Cavalier defense to reclaim the offensive success he’s had in the earlier season. Marion will be inserted in to defend multiple positions as well as finish fastbreaks as well as his favorite floaters.

The marquee matchup of the night is between LeBron James and Carmelo Anthony. Look to see them go head to head most of the night in a can’t miss offensive face-off. In Melo’s two games back from injury (back spasms), he has been putting up bricks, going 7-22 and 11-26 from the field in both games. However, expect him to rise to the occasion and put on a show against close friend LBJ on tonight’s nationwide broadcast. LeBron, meanwhile, has been stringing together some decent games and putting up good stat lines. He’s been averaging 23.6 points and 9.2 assists in his most recent 5 game span. In recent games, it has been obvious that his main objective is to be the primary facilitator of the team and getting his star-studded cast involved early on. However, he has been turnover-prone, even notching a dismal 7 turnovers in his last game against the visiting Milwaukee Bucks. The Cavs live and die by the play of their best player so we’ll see how he fares tonight against a stumbling team whose got a good chance at an upset.

Kevin Love and Amar’e Stoudemire will be matched up tonight and their play seems to be opposite one another. The former relies on outside shooting and the latter depends on his dominating presence and physicality on the low block to make plays. Both players, however, are not defensively inclined and will give each other fits when covering each other on defense. Kevin Love will draw out Stoudemire from the post and Amar’e will try to impose his will on KLove in the paint and mid-post.

Anderson Varejao and Samuel Dalembert will matchup and both serve as veteran defensive presences for their respective teams. Both centers can chip in here and there on offense as well, but are mainly in for rebounding and defensive purposes. Varejao and Dalembert are both very active on the offensive glass and will both vie for those boards to create extra offensive possessions for their troops. Varejao, however, has been very trigger happy and once launched 4 straight shots in a sequence against the Bucks. He has to realize that he is not a shooting big and that is not his role, as his team is loaded with offensive firepower.

I'm at Cavs' morning shootaround. Asked LeBron if he feels bad for Carmelo with all this losing. He said he does. 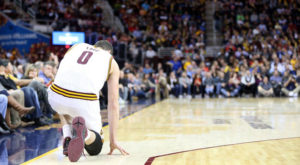