After a rough 1-3 start to the Cleveland Cavaliers’ season, the Cavs enter Monday night’s contest against the Denver Nuggets as winners of 4 straight games. As a matter of fact, this current win streak started on the latter part of a 4-game road trip with a victory in Denver. Averaging 119.3 point on this current streak, the Cavaliers seem to have discovered a little about themselves and how they want to play on both ends of the floor. They look to sweep the season series against the Nuggets tonight. Here are the starting lineups:

Cleveland is coming off of a franchise record night against the Atlanta Hawks where they buried an NBA season high and a franchise high 19 three pointers, including a perfect 9-of-9 in the first quarter where they outscored the Hawks 41-25. The 9 makes from downtown marks the first time in NBA history that a team made that many 3-point field goals in any single quarter without a miss. The Cavs would go on to make their first 11 3-pointers and finished 19-31 (61.3%) from downtown en route to a 127-94 victory. The 19 triples were a franchise high for the Cavaliers, breaking their previous high of 17.

The @cavs set a franchise record with their 19 made threes tonight, breaking previous mark of 17 pic.twitter.com/hMVSehKZD8

Here are the highlights from the game Saturday night:

“This was as close to 48 minutes as we’ve played all year, and it resulted in a huge win for us. We’re on the right page. We still have a long way to go, but the ball’s moving.” -LeBron James

{adinserter 2}LeBron James led the way with 32 points, 6 rebounds, and 7 assists against the Hawks as he helped the Cavaliers cap a perfect week at 3-0. Earlier Monday, James earned the Eastern Conference Player of the Week Award for the week of 11/10-11/16. He averaged 35 points, 7 rebounds, and 7.7 assists on 59.4% shooting this week. This is the 46th time that James has won this honor, the most in NBA history.

The Denver Nuggets come into the matchup with a 2-7 record (1-4 on the road) and are entering the last game of their 3-game road trip as well as the 2nd game of a back-to-back. They started with an impressive win over the Indiana Pacers before getting blown out by the New York Knicks Sunday night.

The Cleveland Cavaliers played the Denver Nuggets just over a week ago and were the victors 110-101. Here are highlights from that game as we can expect to see a little of the same tonight:

Irving is a Top 5 point guard right now, but Lawson is not very far behind on that list, arguably in the Top 10 when healthy. Lawson has the most control on Denver’s offense and is the main distributor for them. With Nate Robinson and Randy Foye likely sidelined with injuries, Lawson should see a heavy dose of minutes tonight. Lawson missed the previous matchup against the Cavs as he was sidelined with a minor ankle injury, something he’s dealt with numerous times in his career. Neither Irving nor Lawson are known to be very defensive oriented guards, but can definitely have their way with defenses on any given night, mixing it up with the ability to shoot the 3, maneuver crafty drives to the hoop, and knock down step back jumpers. With that in mind and barring foul trouble at the point guard spots, expect this to be one of the 3 most intriguing matchup of the night as Kyrie Irving and the Cavs look to continue their winning ways while Ty Lawson looks to get his team back on track.

Although he isn’t starting at the 2-guard spot, Waiters will see lots of court time tonight against the defensively lacking Nuggets. Arron Afflalo has had trouble getting his offense going this season, but will look to get on the right track tonight against the Cavs. Randy Foye, the backup shooting guard for the Nuggets is likely sidelined with a knee injury, forcing rookie Gary Harris into action. Neither shooting guard for Denver has eye-popping numbers, although they can both go for 25 on any given night. Shawn Marion and the Cavs should have little trouble stopping the rookie Harris, while closing out on Afflalo and forcing him to dribble will be an advantage to the Cavs.

This would be the 2nd most intriguing matchup if it weren’t for Chandler struggling to find the basket and with Gallinari expected to miss this game, as he has not been cleared to play back-to-backs yet. Gallo is coming off of a knee injury and just recently had his minutes restriction lifted. LeBron James (who has the cold) missed morning shootaround but is expected to play tonight. Rookie Joe Harris has looked incredibly good in the early going and is coming off of a career high 12 points on 4-5 from downtown. He is certainly in line for more minutes, possibly in the starting shooting guard position, but for now, he’ll serve as Lebron’s backup with Waiters at PG and Mike Miller at SG, both off the bench.

This is going to be the most intriguing matchup of the night as Kevin Love will take his all around game and attack Kenneth Faried all night. Love, Tristan Thompson, and the Cavaliers cannot allow Faried to get going tonight as he is a high energy guy and that will only lift up his teammates to play at the same, high energy level. J.J. Hickson missed the first 5 games of the season because of a suspension, but has been very effective when in the lineup for the Nuggets. Just like Faried, Hickson is a hustle guy who chases down offensive and defensive rebounds to give his team 2nd and even 3rd chance opportunites. Love will look to get back to his scoring ways tonight, as he has been struggling over the past 3 games shooting 4.7-11.7 from the field (40%). Thompson will look to continue being the high energy guy on the boards off the bench for the Cavaliers.

The Wild Thing comes into the night only averaging 10 points, 6 rebounds, and 3 assists, but his presence and activity goes far beyond the stat sheet. Varejao and the Cavs rendered both Mozgov and McGee ineffective last time out, as they combined for 5 points, 8 rebounds, and 3 blocks in 31 combined minutes, while Andy had 15 points, 7 rebounds, 2 assists, and a block by himself in 28 minutes. Varejao’s activity on the floor is what makes him most effective, especially his ability to pick his spots on the pick-and-rolls with James, Irving, and Waiters. Look for Varejao to continue being the guy all over the floor while Mozgov and McGee pick up any offensive scraps off of their teammates misses or pick-and-rolls. They don’t have many, if any, plays run for them, so neither should have a big game tonight. 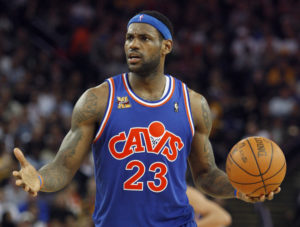